The Omnimatrix, better known as the Omnitrix, was a watch-like device that attached to Ben Tennyson's wrist at the beginning of the series and is the device that the franchise revolves around. The device is a portable library of intergalactic genetic data that allowed the wielder to alter their DNA at will and transform into a variety of different alien species, each with their own unique abilities.

The Omnitrix was destroyed in The Final Battle: Part 2 by Ben and replaced with the Ultimatrix.

In the first form that Ben encountered, the Omnitrix looked like a large wristwatch, primarily black and grey in color, with a grey (or black) dial in the middle (like a watch face) which has a green hourglass shape (Galvan Tech symbol) on it. It has a circular tube. When Ben selects his aliens it shows the alien's silhouette.

In Destroy All Aliens and Omniverse flashbacks, the Omnitrix looks the same as in the Original Series, albeit with two buttons instead of one.

After recalibrating, the Omnitrix resembled a slimmer and sleeker watch-like shape, now with a green wristband, and the face of the dial becoming black and green. The inside of the hourglass symbol glowed in different colours during certain moments; these colours signify the mode that the Omnitrix was presently in. When Ben is selecting his aliens it shows the alien's hologram standing on the core rather than the alien's silhouette.

In Alien Swarm, the Omnitrix looks mostly the same as in Alien Force except it is a darker shade of green.

The Omnitrix in Game Over

The Omnitrix without the faceplate in Dr. Animo and the Mutant Ray

The Omnitrix in Race Against Time

The Omnitrix in Destroy All Aliens 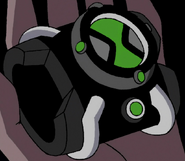 The Omnitrix in Alien Force

The Omnitrix in Ultimate Alien

The Omnitrix in Omniverse flashbacks 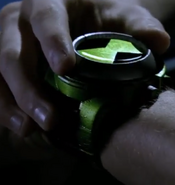 The recalibrated Omnitrix in Alien Swarm

The Omnitrix was created by Azmuth as a tool of peace in an act of repentance following the destruction caused by his previous creation, Ascalon, a weapon of terrible power.[2]

To the rest of the universe, the Omnitrix had a two-fold purpose. One was to promote inter-species understanding by allowing other beings to experience different ways of life.[1] The other was to function as a repository for the DNA of over a million different species that Azmuth thought were intelligent.[DM 1] The samples were scanned, and when necessary, repaired.[DM 2] This collection of DNA was then preserved in the event that any of species catalogued should ever be rendered extinct, allowing the Omnitrix to restore them to life.[3]

Unbeknownst to everyone else, Azmuth had a third reason for creating the Omnitrix. He hoped that his estranged lover Zennith, who had left him as he created Ascalon, would learn of his change and come back to him.[2]

Active Mode is the Omnitrix's default mode. The actual usage time is 10 minutes at a time.[pop-up 1][4] If he changes from one form to another, the combined time for the changes can be no more than 10 minutes, likely less because of power leakage.[DM 3][DM 4] Multiple transformations are energy-intensive and deplete the watch's power supply more quickly than single transformations. Three or four transformations would leave him with substantially less than a combined 10 minutes of time.[DM 5] The Omnitrix seems to time out sooner if it's taxed by activities with a lot of moving, like fighting. However, if regular transformations are tampered with, the user can't always turn back.

After the Omnitrix recalibrated, the symbols on the aliens were also of the green color, and located on their chests due to a glitch.

When the Omnitrix times out, it goes into Recharge Mode. It takes around 5 minutes to recharge, though it may take more time if tampered with. Recharge Mode's main purpose is to prevent the alien DNA from attaching permanently to its host.[pop-up 2][5][merch 1]

The Omnitrix is powered by a special self-renewable power supply that will long outlive Ben.

The Omnitrix can instantly recharge to protect the user from a direct physical threat. This was shown when Ben was stuck to a wall about to be killed by Kevin 11[6] and when Zs'Skayr tried to possess Ben.[7] Both times, despite just timing out within a minute earlier, the Omnitrix recharges instantly when the user's life is put in direct threat. This feature was switched off after the recalibration.

If the user is knocked out or hurt enough, the Omnitrix will revert them to their normal form.

After the Omnitrix had reset,[8] the time out warning feature was turned back on. When recharging the hourglass flashes either red instead of remaining a solid red, as it had when the Omnitrix was in its original form. The Omnitrix can alternatively flash green, rather than red, when signalling a time out.[9]

It scans to match the species, then moves the identified species to the active playlist. If it's seen the species before, it does it passively, without Ben actively scanning.[DM 6]

Unlike in the Original Series, the Omnitrix in Alien Force would not scan by touch (due to its recalibration).

The Omnitrix could scan Kevin's mutations, but it was programmed not to.[DM 7]

In Self-Destruct Mode, the Omnitrix charges energy while counting down until it explodes. S.D.M. functions as a last resort should the Omnitrix fall into the wrong hands. It can be activated by Voice Command.

When in S.D.M. for a few days, the Omnitrix can charge enough energy to cause an energy ripple that will destroy the entire universe. While in S.D.M., the Omnitrix can send out energy bursts capable of throwing the user through the air.

When the S.D.M. is activated, the Omnitrix sends out a signal that any ship can pick up (unless it was activated by Voice Command), such as when Vilgax picked it up with a stolen ship and Tetrax picked up the signal, likely as a distress signal.

The S.D.M was used and successfully triggered in an attempt to force Vilgax to give it to Ben, although he refused. It only destroyed itself, and not the universe, because it was charged for only 30 seconds (as opposed to a few days).[10]

The Omnitrix begins to recalibrate while selecting a set of new aliens.

The Omnitrix makes a beep-like noise, then it changes to a glowing black and green and morphs into its new shape.

The Omnitrix has hundreds of different forms (this is to fit different users).[DM 8]

The Omnitrix gives its wielder a new set of aliens depending on whether it is a hard or soft reset.[DM 9]

When hacking the Omnitrix, Kevin accidentally and briefly reverted the Omnitrix to its original appearance before changing it back.[11] Azmuth could also program it to recalibrate remotely.[DM 10]

The following list shows all known transformations during the timeframe of the Original Series and Omniverse flashbacks. Unless noted, all of these transformations were locked by the recalibration in Ben 10 Returns: Part 1.