The Omnimatrix, referred to as the Omnitrix, is one of Azmuth's creations and the successor of the Ultimatrix.

The Omnitrix resembles a digital wristwatch. Its faceplate is now square instead of round and has a white, green, and black color scheme. The faceplate is black with two green stripes forming an outline for the hourglass of the intergalactic peace symbol. When the faceplate is slid back, the Omnitrix's core is revealed. 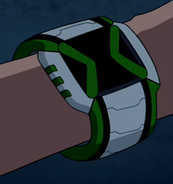 Omnitrix in The Ultimate Enemy: Part 2

According to Azmuth, he started working on this Omnitrix ever since Ben got the prototype during the events of And Then There Were 10. He has spent approximately six years constructing it.

This Omnitrix was first mentioned by Azmuth in Map of Infinity. He was planning on giving it to Ben, but stated that it was not complete. He also mentioned that Ben's maturity needed to increase before he would be allowed to use it.

Towards the end of Ultimate Alien, Azmuth had completed this Omnitrix. In The Ultimate Enemy: Part 2, Azmuth finally gave it to Ben because he deemed him worthy of wielding it shortly after removing the Ultimatrix from the latter's wrist. Ben has been wearing this Omnitrix ever since.

In And Then There Were None, No Watch Ben temporarily wore the Omnitrix after Ben Prime was turned to dust by the Chronosapien Time Bomb.

In And Then There Was Ben, No Watch Ben returned the Omnitrix to Ben Prime after the latter was restored by the former as Clockwork alongside all of his other counterparts.

Active Mode is the Omnitrix's default mode - the Omnitrix can be used and nothing is wrong.

Recharge Mode's main purpose is to keep the Omnitrix from damaging the user by staying transformed for too long. It's deactivated automatically, once the Omnitrix is recharged.

Scans DNA by being near the alien it detects. However, if the Omnitrix is far away from the detected sample, the Omnitrix's other functions will be disabled until the alien is scanned.[15]

The Omnitrix has a randomizer function that works in one of two ways: either the user will continuously change between different aliens every few minutes before timing out, or they will turn into one random alien for an inconsistently short period of time before changing back.[16]
Allows the user to stay transformed for an extended period of time without a time-out. It is dangerous to use often.
The user can transform with a simple thought, neglecting the use of the dial. The limiter is also disabled, allowing the user to stay transformed indefinitely.