For the most part, Omni-Kix Rath resembles an armored/robotic version of Rath with white, black, and dark orange armor designed to resemble tiger stripes, green details, and three white claws on each of his wrists. His face is covered by an orange helmet with green eyes.

The Omnitrix symbol is located on his chest and is connected to his back by two grey pipes. 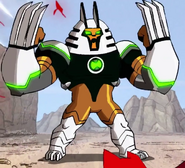 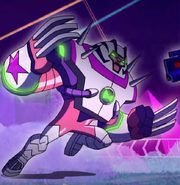 Instead of the single claw of his regular counterpart, Omni-Kix Rath has three mega-claws hyper-extended for greater reach on each wrist, with each claw being incredibly sharp.

His Omni-Kix Armour gives him machete like blades and metal toe-picks to climb any surface.

Omni-Kix Rath shares the same weaknesses as his default form, namely his lack of intelligence and highly aggressive temperament.