Omni-Kix Cannonbolt is enveloped from head to toe in Omni-Kix armor. The yellow plating on the back of his hands is now covered by larger green and black plating with white edges, resembling a stylized turtle shell. His shoulders have grey plating with two lines, one glowing green and one black running below. The inner side of his arms as well as his claws have been left exposed. His head has been heavily reinforced by yellow segmented plating, making his back resemble that of an armadillo. He has white eyebrow-shaped plating covering his forehead and more white plating covering his mouth, leaving only his green eyes exposed. His torso is covered by yellow plating segmented by three thick black lines and two grey metal tubes connect from his midsection to his back. His thighs have grey armor, whereas his knees, shins and toes are reinforced with white plating. Grey plating runs down his spine ending in a formation resembling a short tail. 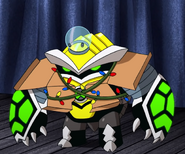 Omni-Kix Cannonbolt shares the same abilities as his default form, namely his ability to curl into a nearly invulnerable ball.

Omni-Kix Cannonbolt is more durable thanks to his Omni-Kix armor, and this makes his sphere form a lot more powerful.

Omni-Kix Cannonbolt rolling around in one place can cause a kinetic energy build up, which he can use to his advantage.[1]

Omni-Kix Cannonbolt shares the same weaknesses as his default form, namely him being subjected to the physical laws of reflection and conservation of momentum, meaning that he subsequently has a more difficult time stopping or controlling his direction if he increases his speed too much.