Oliver Thompson is a character in the Ben 10: Ultimate Alien series who invented weapons for Will Harangue so he could destroy Ben Tennyson (and get it on camera). He also was the cameraman for Cash and J.T.

Oliver is a well-built man. He wears a white suit with a blue shirt and black tie. He is bald in the middle of his head and his hair is black on the sides. The second time he showed up, he wore a beige jacket and white shirt. 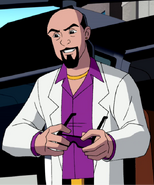 Thompson with a wig and a fake goatee

Oliver was the person that recorded Ben's aliens in a motion scan for a supposed video game which was actually a scam to provide combat data for a robot named the Stalker. He is also presumed to be the creator of the Stalker and it is unknown if his real name is actually Oliver. In the beginning of the episode Video Games, Oliver wore a white suit with a purple shirt and had a gold chain around his neck, wearing a black wig and fake goatee.

He reappeared in Reflected Glory not working for Will Harangue (after being fired for his failed robot), but working with Cash and J.T. He is also wearing a regular outfit instead of his lab coat. He was working on making them famous by video taping them as they pretend to be Ben's leaders. They admitted the truth to their viewers when Psyphon was going to destroy them when he thought that what they said was true so he would not destroy them. When Cash and J.T. used an alien energy decoupler to defeat Psyphon before he could destroy Ben, Oliver's camera's power ran out and the viewers could not witness their heroic action. After the real heroes left, Oliver quits his job with the boys, telling them that the "show's over."

He seemed to never really hate Ben Tennyson, nor does he seem to be a villain. It is likely he was never a villain to begin with. He was only doing his job.