Template:Infobox Alien Tab NRG (pronounced "Energy") is the Omnitrix's DNA sample of a Prypiatosian-B from the Andromeda Galaxy.

In Ultimate Alien, NRG is a humanoid alien made of pure, red, radioactive energy contained in a heavy, oven-like suit that is capable of containing high levels of radiation and heat.

In Omniverse, NRG now has a handle on his head and his shoulders have bolts. He has 3 more bolts on each hand, and two on his chest. Inside his suit, his true form wears two straps, a belt, two wristbands on both arms, and two knee braces on both legs.

While in his armored form, he wears the Ultimatrix/Omnitrix symbol on the chest seal of his armor, and in his true form, the Omnitrix is on his belt.

Mad Ben's NRG looks similar to Ben Prime's, but has orange spikes on his lower arms, shoulders, legs and hands. He has a gray plate on his grill and a spiky handle. The light coming out of the grill is orange, much like his Omnitrix symbol. 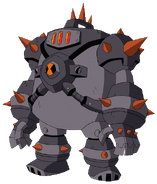 1 of 3
Add photo
NRG is capable of firing highly radioactive energy beams through the vents in his containment suit which can corrode or melt metallic objects. The energy he radiates is hot enough to melt solid metal and rock, even with his containment suit on, through mere contact.

NRG can channel his heat underground, which results with the eruption of massive geysers of lava. In Cosmic Destruction, it was shown that NRG could make a blast of radioactive energy around him, which was powerful enough to leave a funnel cloud.

NRG's containment suit is fire proof and virtually indestructible, with only Taydenite being able to pierce it. However, NRG is able to open the suit easily and whenever he wants to. The reason of that is probably that Ben is not a power hungry criminal like P'andor.

Without his containment suit, all of NRG's powers are enhanced massively. He becomes very agile and gains the ability to fly, and gains limited phasing abilities. He can manipulate energy at a higher level, able to consume it simply as nourishment or to increase his power. As shown in Hot Stretch, NRG can fire energy balls and fire energy out of his mouth. He can make himself glow like a light bulb as seen in his fight against Zs'Skayr.

Because NRG is always in his containment suit, his abilities are weaker than if he was outside the suit.﻿ Due to dangerous radiation his body gives off, NRG must stay in the suit for the safety of others and keep its radiation level to a minimum.

Taydenite is the only known element that can damage NRG's suit, outside of the suit itself.

The eye holes in the suit are quite small, which limits his vision somewhat.

Like P'andor, NRG is vulnerable to carbon dampening rods, which slow down nuclear reactions and inhibit his radiation generating abilities.

NRG is one of the Andromeda Galaxy aliens playable in Cosmic Destruction. He can shoot laser beams, which melt metal. He can also create a big explosion around himself, which is yet to be shown in the series. If he is on a high enough platform, he can preform a body slam attack that damages enemies if they are in range.