The body in Mr. Mann's true form is made of a purple substance that resembles mud, which can shapeshift. He is able to change into a human. 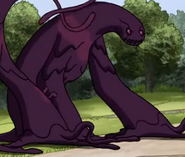 Mr. Mann and his wife did not approve of their daughter's marriage with Joel, and enlisted Camille's Ex-Boyfriend to break up the wedding for them since an ex-boyfriend trashing a wedding is normal behavior and would keep anyone from suspecting their involvement. When that failed he and his wife took matters into their own hands, attacking Joel and his parents in an effort to stop the wedding. They were battled by their daughter Camille, along with Betty Jean, Gordon, Max, and Gwen Tennyson. Mr. Mann and his wife merged into one powerful Lenopan to battle Heatblast, but got turned into a statue.

Mr. Mann, along with Mrs. Mann, Camille's Ex-Boyfriend, and the bodyguard all got taken away by the Plumbers off-screen.[ES 1]

Mr. Mann can shapeshift. He also has flexibility, the ability to change body parts, and super endurance.