Michael Morningstar is an actor who first appeared in Bright Lights, Black Hearts. He feeds on the life force of people.

Michael looks like a young teen with blonde hair. He wears a grey sweater and white pants. He has dark blue eyes and brown eyebrows.

In his powered-up form, his hair is spiked upward, his skin glows gold, and his eyes are blank yellow. After absorbing more life energy, his hair and eyebrows change to ivory and resemble lightning bolts, his teeth grow into fangs, his hands gain claws and feet turn white, and his eyes develop two white markings underneath each.

In his drained form, his hair is in scraggly patches, his skin is charcoal gray, and his eyes are a dull yellow with black irises, which resembles his Classic Timeline counterpart. 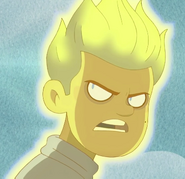 Michael is an extremely vain, power-hungry, and egomaniacal actor. He uses this profession to have people admire him long enough to feed on them.

Michael has survived for hundreds of years due to draining the life force out of his admirers.

Michael first appeared in Bright Lights, Black Hearts, where he first met Gwen. He tires to get back at Ben for stealing the spotlight earlier. He invites Gwen to lunch so they can talk. Later on, Michael tries to learn more about Ben, and ignores all of Gwen's fan questions. Gwen is upset, and walks away. Michael follows her and attempts to absorb her power.

In The Charm Offensive, Michael arrives at Biggie Box only to see Charmcaster tormenting Gwen. He demands her to stop, and absorbs some of Charmcaster's life energy. After he gains power, he chases Gwen around the store trying to get her to adore him. Gwen asks him why he's treating Charmcaster the way he is when she loves him. Michael claims that all of his fans love him, and due to him being an actor, he can be whatever they need him to be to fulfill their “pathetic lives”. He also says that she is nothing more than a glorified battery to him. Charmcaster soon arrives questioning worry about Gwen when she's a "nobody". Michael yells at her that they won't leave until he gets Gwen to see how great he is. Gwen interrupts and tells Charmcaster that Michael is using her. He tires to get Charmcaster to doubt it, since Gwen is the enemy. He then absorbs even more of her power. Finally gaining more power, he battles Omni-Enhanced Four Arms. As he prepares to finish off Ben, Gwen arrives with solid proof that Michael is using Charmcaster. Michael is then absorbed into Charmcaster's Spellbook as punishment.

In Which Watch, Charmcaster's spellbook is destroyed by Monster Kevin. It is possible that Michael may have survived[DR 2] and is currently at large.

Michael has the ability to drain the life force from living beings when they start admiring him. The more life force energy he drains from others, the more powerful he becomes.

Michael has enhanced strength, being capable of keeping up with Heatblast.

Michael can fly when he absorbs enough energy.

When people stop admiring him, Michael loses his powers as he is no longer able to feed on them.