Magister Maxwell "Max" Tennyson or Grandpa Max as his grandchildren call him, is the paternal grandfather of Ben and Gwen. He is a slightly overweight man in his late 50's to early 60's, with a keen sense for adventure and a strange taste in exotic food. Max ends up taking the kids on a summer vacations' road trip across the United States. Max travels in a motor home nicknamed the Rust Bucket, which he has modified with advanced technology.

Max was a semi-retired legendary Magister rank Plumber and is the mentor of Ben, Gwen, Kevin, and the Plumbers' Helpers. Max is widely considered the greatest Plumber in the Milky Way.[9] As of Omniverse, Max quit retirement and joined the Plumbers again, and is currently Magister of Earth.

In the original series, Max wore a white shirt, covered by a red buttoned-up Hawaiian shirt with a floral design. He had grey hair and blue pants, as well as brown shoes.

In Alien Force and Ultimate Alien, Max's appearance did not change except for his blue pants being changed to brown, he had more wrinkles, a slightly darker shirt, and whiter hair. He wore black shoes.

In Omniverse, Max's appearance has not changed that much except for his brown pants, which are now white. He has whiter hair, more wrinkles, and his eyes have been changed to little black dashes. His white shirt that he wore under his red button up shirt has changed to black. Also, his shoes are now grey at the top and black at the bottom.

In the original series, his pajamas were blue and had yellow lightning streaks.

While in the hospital in The Alliance, he wore a light blue hospital gown, with a cast around his left leg, bandages around his head and a band-aid on his left cheek.

In Dr. Animo and the Mutant Ray, he wore an orange life jacket.

As a Lepidopterran hybrid in the same episode, he had a maggot-like body with green skin and six legs. He had four eye stalks with orange eyes and grey hair.

In Back with a Vengeance, he wore a yellow raincoat while touring Niagara Falls on a ship.

In A Change of Face, he wore a pilgrim outfit.

In Merry Christmas, while cursed as Santa Claus, he wore a red and white robe, a red hat and green gloves.

In Game Over, while inside Sumo Slammers Smackdown, he wore grey armor which covered his left pectoral and lower body. He had brown hair on top and on the sides of his head, along with a brown beard.

In Monster Weather, he wore blue jeans, a brown headband, a brown vest and brown sandals along with his red Hawaiian shirt.

In Under Wraps, he briefly wore a blue bath robe.

In Under Wraps, The Return and Be Afraid of the Dark, he wore a hazmat suit.

As Ultra Grandpa in Perfect Day, he had a stereotypical superhero costume. He wore frameless blue goggles, a cyan shirt and white pants. He also donned a white cape like Ultra Ben.

In Divided We Stand, in addition to his red Hawaiian shirt, he wore brown shorts and brown strap sandals.

After being turned into a 10-year-old in Don't Drink the Water, Max's hair was similar to a crew cut, and rather than fat, he looked skinny and athletic. He initially wore his own clothes, then switched to Ben's clothes.

In Big Fat Alien Wedding, during the wedding ceremony, he wore a black tuxedo.

In Alien Force and Ultimate Alien, he sometimes wore a short-sleeved white T-shirt with light brown pants and a green pouch with a sling that hangs on his shoulder.

In a flashback in Ben 10 Returns: Part 2, Max wore his regular shirt as well as dark blue shorts, white socks and brown shoes.

In Max Out, he wore a light brown long coat and a brown hat with a horizontal black stripe, over his regular outfit.

While under the identity of the Wrench, he wore a black T-shirt and light brown pants under a brown robe.

In Alien Force and Ultimate Alien, he occasionally wore a Plumber suit.

In Alien Swarm, Max wore a blue Hawaiian shirt instead of a red one. He wore a brown jacket over this outfit near the end of the movie. In a video recording, he wore a bluish grey vest over a long-sleeved white shirt, as well as blue pants.

As seen in a flashback in Moonstruck, Teen Max had short brown hair. He wore a brown jacket over a red shirt as well as light brown pants. He briefly wore his Air Force uniform.

In a flashback in Of Predators and Prey: Part 2, Max's fishing outfit consisted of a brownish grey hat with a horizontal grey line, as well as baggy brownish grey pants held up by black straps.

In a flashback in Blukic and Driba Go to Area 51, as a young adult, Max had black hair and was scrawny. He wore the same Hawaiian shirt he wears in the present.

In Something Zombozo This Way Comes, as a Zombie Clown, Max had white makeup, red lipstick, a red nose and different hair.

10-year-old Max in Don't Drink the Water (his clothes) 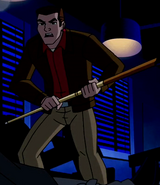 17-year-old Max in a flashback in Moonstruck 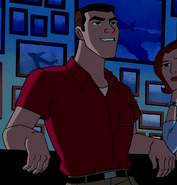 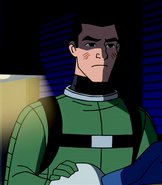 Max as an astronaut 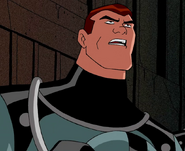 Max as a Plumber in the original series flashbacks

Max in a flashback in Vendetta

Max in a flashback in Ben 10 Returns: Part 2

Max's pajamas in the original series 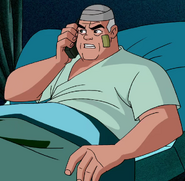 Max in a hospital gown in The Alliance

Max in his Plumber suit in the original series 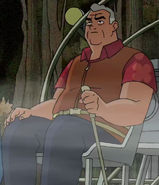 Max in an orange life jacket in Dr. Animo and the Mutant Ray 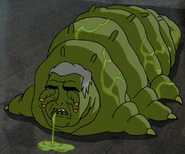 Max as a Lepidopterran hybrid in Dr. Animo and the Mutant Ray 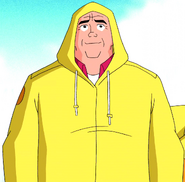 Max in a yellow raincoat in Back with a Vengeance

Max as a pilgrim in A Change of Face

Max inside Sumo Slammers Smackdown in Game Over

Max in a blue bath robe in Under Wraps

Max in a hazmat suit in the original series

Max in a black tuxedo in Big Fat Alien Wedding

Max in Destroy All Aliens

Max in his fishing outfit in a flashback in Of Predators and Prey: Part 2 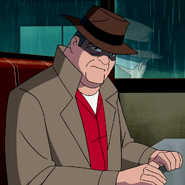 Max in his alternate clothing in Alien Force and Ultimate Alien

Max as the Wrench in Alien Force 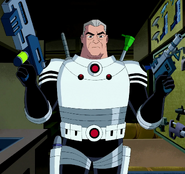 Max in his Plumber suit in Alien Force and Ultimate Alien

Max in a video recording in Alien Swarm

Max in a brown jacket in Alien Swarm

Max in his Plumber armor in Omniverse 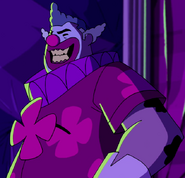 Max as a Zombie Clown in Something Zombozo This Way Comes

An easy-going, kind, and normally jovial man, Max Tennyson often comes across as pleasantly absent-minded at times, but is actually quite perceptive. For instance, he knew early on in Ben's adventures who was most likely pursuing him, as he was aware of Vilgax's history having fought the alien tyrant many times before.

Max is a very brave man, having dedicated his life to preserve peace on Earth between humans and extraterrestrial life. His bravery has resulted in him being injured, having his DNA spliced, nearly killed in several dozen ways, and more. His prioritization of others' safety above his own even when bereft of a weapon shows his selfless nature at its finest.

Ever the consummate strategist, Max is very intelligent, being able to select the correct weapon to battle Zs'Skayr based on minimal information given to him by Ben, choosing a light-based weapon to bring down the rogue Ectonurite.

Though well-meaning, Max is not without a stern side, having struggled to guide Ben during the first few months of his grandson's possession of the Omnitrix. When pushed, Max can be strict, harsh, but not unreasonably so, not being afraid to call people out on their selfishness and mistakes when necessary.

Max has a weird appetite, which comes from his travels both on the Earth and beyond.[pop-up 1][10]

Click on the images above to see the respective histories.

Although Max doesn't have any super powers, he is very skilled in combat and can take on anyone who does have them as he is quite athletic for someone of his age. As a retired Plumber, he has access to a variety of various Plumber tools and weaponry, which he uses skillfully. Aside from that, his experience from his Plumber days made him knowledgeable on various species of aliens. He is also able to strategize well and is skilled in inventing new machines. He is telepathically connected to his lover, Verdona.[11]

Before joining the Plumbers, Max was a United States Air Force pilot, with dreams of joining NASA and going to the moon. He was an expert at flying an F-104 Starfighter and was able to shoot down an alien spacecraft.[11]

Despite being highly trained, Max is far from the prime athletic specimen he was during his days as a Plumber. He is a senior citizen, and has not managed to keep in shape, though he does still possess an incredible tactical mind to compensate for his less than stellar physical conditioning.

During Xylene's early years, she met Max Tennyson, who at the time was a Plumber. She wanted Max to go to Ringa Morr with her, but Max declined it saying he has to defeat Vligax. Later when Xylene was unlocked from her sleeping pod on earth, Max again declined to go with her telling that Ben and Gwen are a new world for him.

Max helps Ben in his travel around the country. He was captured by Kevin 11 and had to be rescued by Ben. He accesses to Plumber base in Mt. Rushmore and later defeats Zs'Skayr with a sun gun.

Max helps Ben and his gang to destroy the Null Void power source. He joins the gang after the level MorOtesi. He appears in holograms on Plumber Badges, in the beginning and ending of each level. He battles the Null Void monsters on Earth.

Max is a non-playable character. He gets captured by Dr. Animo and gets rescued by 11-year-old Ben and Rook.