The Mark 5 Nanoshift Enabled Exo-Armor is a creation of Inspector 13. It is referred to as the Cincotrix by Clyde Fife. It is a wrist band that morphs into a full-fledged armor with various weapons giving the user enhanced strength, durability and flight.

The Mark 5 Nanoshift Enabled Exo-Armor is a small gold bracelet on a wrist. You can see a black plate with the number "5" on it. Regardless of the extent to which the device produces the armor, it will always have a golden color scheme with a few black elements. When activated (with a small tap on 5), dresses the wearer in armor, which provides speed on the ground and in water, invulnerability, super strength, varied weapons and a breathing tank. 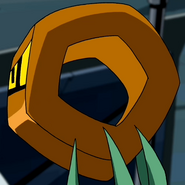 The word "cinco" means "five" in Spanish and Portuguese.