Manny Armstrong[1][2] is a Plumber and an ally of Ben's Team. He was previously part of the Amalgam Kids and the Plumbers' Helpers.

In Alien Force, he wore a sleeveless black-green outfit, black wristlets, black pants with green pockets. From Voided onward, Manny has a robotic prosthetic hand in place of his lower left hand.

In Omniverse, Manny has more humanoid traits. He is scrawnier, especially his lower arms, and he now has a more natural-looking prosthetic hand.[DJW 1] He also has a bigger chin and slightly darker skin color. Since he became an official Plumber, he wears a Plumber Suit.

Before his encounter with Servantis, Manny was a regular human. He was a thin, Afro-American kid with an Afro. He had big, dotted eyes, thick eyebrows, and dark lips.

After his amalgamation, he looked like a regular young Tetramand with more averaged sized eyes.

While working with the Rooters, he wore black Proto-Tech Armor.

Manny as a human

Manny five years prior to Omniverse 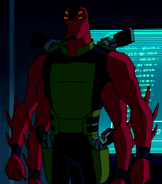 Manny with a green cap 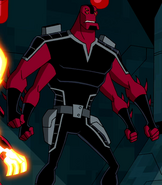 Manny in a Rooter suit in Omniverse

Manny is hot-headed and rebellious, often willing to fight even when it may be not necessary. He enjoys fighting, and can sometimes become rude toward his teammates, especially Pierce, who he doesn't accept as a field leader, and Alan, whom he would like to be more aggressive. He also once argued with Kevin, and was less respectful towards Ben than the other Plumbers' Helpers. However, he is also shown to be devoted to Max, refusing to reveal his identity to D'Void and willing to help him when he was seemingly attacked by Ben. Despite their differences, Manny shows concern for his team, as he was willing to sacrifice himself so his team could escape (although he had forgotten their ship had been destroyed).

Manny serves as Kevin's mirror on his team, and share many character traits. He is cocky, abrasive and has difficulty expressing his personal feelings. However, Manny lacks his mirror's laid-back attitude, often permanently angry and insulting to even his own allies, earning him the dislike of Kevin and Ben and forcing Helen to act as peace-keeper.

Manny's anger has lead him to cross the line at times, such as when he tried to force Ben, Gwen and Kevin to reveal themselves as DNAliens by shooting the wheels off a nearby tanker. The tanker crashed by a fuel station and caught fire, endangering the lives of the driver and innocent bystanders. When confronted over this, Manny shows no remorse for the act, proving he is more concerned with fighting bad guys than saving lives.

Manny shares a love-hate relationship with Helen. While his hot-headed attitude, when confronted to Helen's wiser personality, cause them to often fight, he is shown to truly care about her, being once willing to attack Ben after he hurt her.[2]

Manny was actually born as a human who was taken to the Null Void by Servantis. He used Kevin's powers and a Tetramand to create Manny's actual form. He, along with Helen, Alan, and Pierce formed a group, named the Amalgam Kids, and they were used by Servantis to do "nasty things." After they failed in their ultimate mission - destroy Ben Tennyson - their memories were wiped by Servantis.

Years later, Manny became part of a team of young Plumber apprentices, the Plumbers' Helpers, which included him, Helen and Pierce. However, they had little knowledge of the technology they used, and Pierce was sucked by a Null Void Projector they had confused with a disintegrator weapon. Believing that Pierce was dead, Helen and Manny continued the work, capturing many kinds of aliens they confused for criminals and sending them into the Null Void. Though part of those they captured were DNAlien, most of them were just innocent aliens.

In Plumbers' Helpers, they eventually encountered Ben, Gwen, and Kevin. Despite Helen's doubts, Manny immediately assumed they were DNAliens, and they captured Kevin in order to interrogate him. Kevin even told them their device would not kill him but send him to the Null Void. However, Ben and Gwen came to free Kevin and were eventually able to explain to them the truth. After learning the error of their ways, Helen and Manny travelled into the Null Void to look for those they had wrongly imprisoned.

In Voided, Manny was one of the resistance fighters under the orders of The Wrench battling D'Void. A past battle cost him his lower left hand, which has been fitted with a crude clamp replacement.

Manny returned from the Null Void in War of the Worlds: Part 2 and helped Ben and the others fight off the Highbreed. In the end, he, along with Alan, Cooper, and the other Plumbers' Helpers, became a pupil of Max.

Manny appeared again in Vengeance of Vilgax: Part 1, where he, along with Max's other pupils, tried to defeat Vilgax, but Manny was easily defeated and thrown onto a tree.

In Above and Beyond, the Plumbers' Helpers came on a satellite in order to save Max from a seemingly brainwashed Ben. Manny was more willing to fight Ben than the other Helpers, but, when he eventually found him, he was easily defeated by Rath. During their fight, they accidentally damaged the gyroscope, causing the satellite to start falling towards London. By working as a team, the Helpers were able to neutralize Humungousaur and throw him into space. They then tried to sacrifice themselves to prevent the crash, but didn't need to, as it was revealed all of this was just a test to see if they were worth being true Plumbers, except the falling part.

In Absolute Power: Part 1, Alan informed Ben that Ultimate Kevin had stolen Manny's powers. However, he got his powers back when Ultimate Kevin was returned to normal.

Manny returned in Weapon XI: Part 1, when he and Helen were on Khoros taking Gorvan into custody. However, they were attacked by Phil and Leander. Fortunately, Ben, Gwen and Rook arrived just in time and saved them. Ben took them to Kevin's garage where Alan explained that they were used by the Rooters and had their memories wiped. When he came to the Null Void to help Kevin, he, Helen, and Alan were brainwashed by Servantis and were commanded to destroy Ben. In the battle, he defeated Rook but was quickly defeated by Alien X who was controlling Leander's body. At the end of the episode he, along with the others joined the Rooters and was commanded to hunt down Ben.

In Weapon XI: Part 2, just as they were about to destroy Ben, a mutated Kevin grabbed Servantis, destroyed the crystal on his forehead and used Feedback's powers to free them from his control forever. He and the other Amalgam kids then returned to Earth.

Being a Tetramand hybrid, Manny possesses most of Four Arms's powers, which include enhanced strength, enhanced durability and strong teeth.

Similar to Four Arms, Manny is able to scale a wall quickly without any problems.[3]

Manny is quite capable of melee combat, being able to hold his own against both Kevin and Rath, both of whom are very skilled in melee combat themselves.

In addition to his powers, Manny usually uses four blasters as his weapons.

When hunting for aliens, Manny possessed a device that could make out the heat signatures of the trio to detect them. He and Helen also used two metal sticks with a pink energy coil on the end that they used to pull the aliens they hunted into their Null Void Projector.

Similarly to full Tetramands, Manny is not very fast, which puts him at a disadvantage against faster opponents like Rath.[2]

Unlike a full Tetramand, Manny can only withstand fire to a limited degree (though he is still more resilient to fire than humans).[3]