The Malware Armor is a variation of the Retaliator Armor crafted from Malware's remains by Albedo.

Its appearance depends on the wearer, making them look like a Mechamorphic counterpart to their usual selves with red patterns, the orange 'core' that Malware had, and sharp spikes.

Like Azmuth's original armor, Malware Armor is in the form of a cube when not in use. 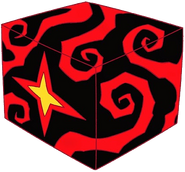 The armor was fashioned from Malware's remains by Albedo after they were stolen from the Galvan Historical Museum. The armor was first used by Vilgax in attempt to gain Malware's abilities so that they could conquer Galvan Prime and kill Ben and Azmuth.

Like the Retaliator Armor, The Malware Armor fuses with the user, turning them into a Galvanic Mechamorph-like form.

The Malware Armor inherits Malware's powers and abilities, including absorption of technology.

When used by Vilgax, his strength increased to the point where he could launch Diamondhead from Galvan Prime to Galvan B with a single punch, and he became durable enough to withstand attacks from Atomix.