Lester is one of Grandpa Max's friends from college, where they used to play badminton, he first appears in Clown College. 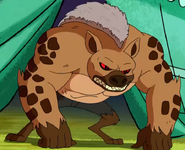 In the episode Clown College, he and his team are at the stadium, until a creepy Zombozo, along with his henchmen, spread throughout the field, hypnotizing everyone so he could steal everyone's wallets and purses. Stinkfly later breaks Gwen, Grandpa Max and the Fabulous Four out of control to stop Zombozo and his henchmen, with Coach Keene leading them.

In The Beast Inside, he returns, this time where he gets turned into a mutant hyena due to Animo's Animerger. Ben turns into Upgrade to fight him, but Lester defeats him by throwing him near some garbage cans. As he's about to attack Gwen, she manages to remind him of who he is, bringing him back to normal.