Kevin Levin is a villain in Ben 10. He is an 11 year old boy and one of Ben's former bullies from school who managed to create his own Omnitrix prior to the events of Season 3.

Kevin is a thin and scrawny boy with shoulder-length black hair, pale skin, and dark brown eyes, wearing a torn black T-shirt and a padlock necklace around his neck, blue jeans, and black shoes with red at the bottom. In his debut, he wore an olive green jacket. 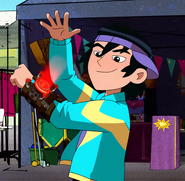 Kevin wears a brown Omnitrix-type device called the Antitrix on his left wrist.

Kevin's padlock necklace turned out to host a tracker placed by the Forever Knight, which he later destroyed.[1]

Kevin is a bully who seems to enjoy causing other people misery, taking sadistic joy in inflicting pain and suffering. He is also incredibly arrogant, believing himself to be better with the Antitrix than Ben is with the Omnitrix despite having had it for a far lesser period of time, and is determined to prove this by destroying Ben. Kevin is loathed to believe that he could need help with anything, which caused him to initially reject the Forever Knight's offer of recruitment.

Despite his ruthlessness in regards to Ben, Kevin doesn't want to hurt others who aren't involved with their feud. He especially doesn't want to see Gwen getting hurt, as he has a crush on her. He has also shown a willingness to swallow his pride and work together with Ben if need be.[1][2]

For all his bravado, Kevin is actually quite lonely. Jealousy of Ben having friends and family that he can count on appears to be a driving force behind his hatred of him. It is also heavily implied that his dad is an alcoholic.[3]

Kevin and Charmcaster develop a mild rivalry over who the better, badder enemy of the Tennyson cousins is, although after a while they start displaying a begrudging respect for each other and a willingness to work together.

Kevin Levin was one of Ben's bullies, which caused Ben to have a fear of public restrooms, and why he wouldn't eat lunch for three months.

Kevin Levin had a strange dream that was showing him something that it wanted him to draw it down. This strange dream had shown him the blueprints that led to his fulfillment of creating the Antitrix.

Kevin is now in constant pursuit of Ben, hoping to destroy him in order to prove his and the Antitrix's superiority over Ben and the Omnitrix. Intrigued by him and his abilities, the Forever Knight hopes to recruit Kevin to his cause, an offer that Kevin rejects for the longest time before finally giving in and accepting it.

Kevin seems to be remarkably smart since he was able to build the Antitrix with home materials.[4] He also added minor modifications, mutating and cross-contaminating the alien DNA contained within it[DR 1], thereby making his alien forms stronger and nastier than Ben's.

Kevin is equipped with a powerful device called the Antitrix, a makeshift version of the Omnitrix, which can transform him into mutated fusions of Ben's aliens. It also contains alien DNA that Ben has not unlocked yet.

Since he had recently created the Antitrix he has less experience than Ben, it makes it difficult for him to fully control his transformations. Furthermore, the alterations he made to the Antitrix makes his alien transformations unstable and unbalanced.

Kevin can be easily emotionally manipulated and provoked to anger, as evidenced when Ben called him out for not having anyone to go back to if he fails, which ends up driving him to finally join the Forever Knight.[5]