Kenko, the Shapeshifter appeared as the main villain of Sumo Slammer Smackdown in Game Over. He is a shapeshifter and former archenemy of Ishiyama, the hero of the game.

Kenko is a short bearded pale grey skin humanoid with blue hair. He has his hair in a ponytail. He wears a tarted shitagi, dark pants, cloth wrapped around both his arms and sandals.

He owns a dark colored mech suit, indigo and purple, with his head only showing. The mech has wing-like verniers on his back with black pants and a giant rope belt. 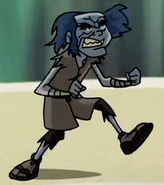 Kenko without his mech suit

He overhears Ben talking about the Upgrade token; believing it could be used to allow him to take over the real world, he attempts to obtain it. While Ben searches for the token, he fights and defeats Ishiyama, then assumes his nemesis' form after Ben reaches the Upgrade token first. He tries to trick Ben into taking him to the real world, but Grandpa Max's timely intervention in the game reveals his ruse. As Upgrade, Ben's control over the game allows him to depower Kenko, revealing him to actually be a small, weak, human-like creature. Afterward, Kenko is defeated when he knocks himself out by accidentally hitting himself in the head with a piece of his own armor.

Kenko was mentioned in The Final Battle: Part 1, when Ben mentions that in a sequel of the first Sumo Slammers series called Sumo Slammers: Hero Generation, taking place 5 years later, he teamed up with Ishiyama. This, along with the series' name being based on Alien Force's working title and the other descriptions Ben gave, is a self-parody of Alien Force itself due to Kevin teaming up with Ben in Alien Force.

He only appeared as a video game character throughout the series.

In And Then There Was Ben, Kenko can be seen while Ben plays Sumo Slammers.

In Fight at the Museum, Exo-Skull plays the same game and he gets defeated by someone called "Burgos" who used Kenko's character.

Kenko powers matches with his name. He can shapeshift into anything or anyone. His recent forms he take on are a kenshi trunk, a pillar, a dragon, a golden lion-dog statue, a wyvern and Ishiyama.

Without his armor, he is just a powerless weak little man.