Kane North, also known as Kangaroo Kommando, is the identical twin brother of Abel North, who went around getting his brother framed for his criminal acts.

In the original series, Kane was a light skinned, slightly fat man with a black, flipped-up hairstyle and mustache. He was wearing the Kangaroo Kommando suit, which was a brown uniform with a yellow kangaroo silhouette. He had black briefs, a black belt with dark brown pockets, and yellow gloves. He also had a black cap with two holes for his eyes and a capital, yellow K. His belt clip formed a K in a frame, in reference to his name.

In Omniverse, Kane has brown hair with graying temples and beard, and a more muscular build. He wears a brown jacket with a black turtleneck and dons a necklace with a gold kangaroo symbol. He has a new armor.

In the flashbacks, his armor is the same as the one in the original series, except his pockets were yellow and his beard was brown. 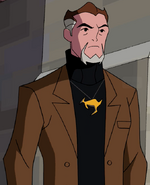 He stated that he created Kangaroo Commando, Ben's favorite television show at the time, and that Super Alien Hero Buddies' (a kids' show that Tim Dean tried to take credit for) was his idea. The various crimes meant to boost his popularity included sabotaging a roller-coaster at the new amusement park in the studio and trying to kill his brother and Tim Dean by throwing them in a cauldron of boiling chemicals.

5 years prior to Omniverse

In The Vengers, he tried to explode a bomb on a building. As soon as Captain Nemesis appeared everyone started celebrating him even the 11 year old Ben Tennyson. While Nemesis was interviewed by Will Harangue, he became angry because nobody listened to him and exploded the bomb. The people however, were saved by XLR8. Seeing that XLR8 gets all the attention he started to get jealous. After that, he was taken to custody.

At the present, five years after the incident, Kane meets Carl at the jail, who presents to him a new entrepreneur: Billy Billions, who wants to form a group with them. With Billy's help they both got new and more powerful armors.

After the Vengers became more popular than Ben himself, he and Nesmith started to compete to see who is the more popular. It just got worse when they wanted to rename the group and the Nemesis Tower and the Billions Tower started to shoot each other. However all this was transmitted live by Harangue which caused all of Bellwood to know the truth about the Vengers. When the police arrived the whole group escaped.

When Kane North as Kangaroo Kommando, he can use all Kangaroo Kommando' tools, include the boots can change to kangaroo's legs shaped spring shoes , smoke bomb, and a Multi-function gun, which can make foam to extinguish the fire, shot the tripwire, or become Rope Launcher.

After Billy Billions's upgraded, his suit changed from a costume to the real armor, which mean it can realy defend against damage, his spring shoes can jump farther and higher, it can jamp from the Nemesis Tower to the Billions Tower with takeing Captain Nemesis, he also get kangaroo shaped throwing weapon, which look like Kangaroo Kommando's logo.

Kane and his brother have the same names as two Biblical figures, the brothers Cain and Abel. But in the Bible, Cain is older than Abel but in the show, Kane and Abel are identical twins.

Kane and Abel's last name, North, is a reference to Adam West, the actor who played the titular role in the 1966 Batman TV series.

The name 'Kangaroo Kommando' was spelt in the original series 'Commando' - by Kane's brother; Abel who originally played the character. By the time of Omniverse, it appears Kane has adopted the altered spelling for super-villainy.