Dr. Joseph Chadwick was the director of alien technology for the Forever Knights and is the current and sole remaining Forever King. He continues his anti-alien activities and hopes to restore the Forever Knights to their former glory. He is temporarily an alien hybrid.

He was a slender man who has black hair, a red scar on his right blue eye, and wears a white labcoat, grey trousers, and black shoes.

In Omniverse, he wears a crown over his head, a golden Forever King armor with a red and white cape, a Forever Knight symbol on his chest, and had grown a goatee.

After drinking the Dr. Jekyll formula, he has been transformed into a greyish black-furred muscular alien gorilla-like mutant with golden spikes on each shoulder, five huge fingers, and toes, a tattered robe on his chest and around his waist. He still has his golden Forever King armor on his arms and legs. 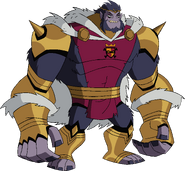 Chadwick has a sinister and psychotic personality. He has no qualms hurting aliens like Ship to achieve his goals. He is completely loyal to the Forever Knights' cause.

Despite his demeanor, he seems to have a sardonic sense of humor; as he taunted Ben Tennyson and Kai Green by referring to the latter as the former's girlfriend and quipping, "Ah, young love" when they embraced after Ben saved Kai, much to their chagrin.

In his debut episode, Pet Project, Joseph was assigned to oversee the mass-production of an Anterian Obliterator spacecraft that would enable the Forever Knights to travel to the alien dragon's planet after Ben helped it escape. But because the technology was too complex for human operation, Joseph sent Sir Morton to capture Ship to help perfect it.

During the confrontation at his hideout, Joseph used a control device on Ship. That plan proved to be a failure later during the episode when Julie Yamamoto helped Ship gain control of himself again. When Swampfire threw a fireball at a gas tank inside the hideout, it exploded and caused a collapse in the hideout. While Sir Morton and the other knights escaped, Joseph was caught in the cave-in.

Joseph reappeared as the new Forever King in Return to Forever, having survived the cave-in, where he tried to wipe out all alien life with a Highbreed Pulse Generator, but was stopped by Ben and knocked out by Jimmy Jones.

In An American Benwolf in London he transforms into a gorilla-like monster after drinking Dr. Jekyll's formula so he could pull Excalibur from the stone. He proved to be unsuccessful despite his increased strength, and was last seen escaping from the Thames River with the damaged Forever Ninja. Seeing that he could not claim Excalibur for himself, he left it behind in its underwater vault.

In Animo Crackers, Animo mentioned that Chadwick approached him about "ruling the world for him".

Before his transformation, Chadwick was a normal human being with some knowledge of alien technologies and chemicals.

After drinking Dr. Jekyll's formula, Chadwick gains enough strength to put him on an equal standing with Humungousaur with matching agility and ape-like dexterity. He has great endurance and stamina, able to survive an underwater cave-in.

Chadwick's single-mindedness to eliminate all aliens from the Earth has already driven him to insane lengths. After drinking Dr. Jekyll's formula, he became even more unstable, choosing to remain inside a flooding chamber and preventing anyone from leaving.