Jonah Melville is a poacher who appeared in The Krakken.

He is a tall and tanned man with a hawk-like nose. He has a stern-like face having tear troughs and dark lining around the eyes, giving him an almost tired look. He has short, reddish-brown hair and a spiky goatee.

He was wearing two different suits, one of them being a cyan uniform with black accents and boots with his name and logo on it. The other was a silver diving suit with an oxygen pack and belts with pockets. This suit covered everything but his face.

Jonah in his silver wetsuit 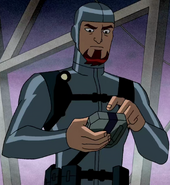 Jonah in his silver wetsuit (no mask)

When Jonah first appeared, he seemed like a nice and friendly man with a sense of humor, as he laughed at Ben's mention of the Krakken. Later on, however, he is shown to be very greedy and selfish and caring about nothing except selling off the Krakken's eggs to make a fortune. He was also very brave, as he showed no fear when he battled Stinkfly with his men's help, and later both the Krakken and Ripjaws on his own. Even after his mech suit was destroyed, Jonah made one more persistent and vain attempt to attack the Krakken with a knife.

Jonah was first seen in The Krakken, where he and his men pretended to be a fish saving organization, named Friends of Fish. They fenced off a portion of the lake, which Captain Shaw found suspicious. Shaw wanted to cross the fence, but Jonah asked him to turn around. Soon after that, the Krakken attacked Jonah and his crew, who were saved by XLR8. The Krakken wanted a box from them (which was later revealed to contain one of her eggs).

Later, he was seen after his men took Shaw out of the water while he was searching for the Krakken. He asked Shaw what he was doing down there, but the captain refused to tell him and punched Shaw in the face. The men took Shaw to his ship, while Jonah dropped a tracking device into the water that would help him locate the eggs. In addition to this, he dropped a bomb onto Shaw's ship and destroyed it.

What he didn't know was that Ben was with Shaw and had heard everything. Ben turned into Stinkfly and followed them. In order to stop him, Jonah dropped oil barrels into the water and blasted them to detonate. This managed to get Stinkfly to the water where Jonah tried to run him over with his boat. Stinkfly managed to hide from them and save Shaw, who had been just thrown out by Jonah's goons.

At the Rust Bucket, Gwen looked up Melville's name and discovered his true story. He was a poacher who traveled around the world, poached rare animals, crated them up and sold them to private collectors. It was then clear that Jonah was an enemy to all wildlife.

Jonah was seen at a harbor where he was retrieving the second egg with a crane and an aquatic mech suit. He said that after he sold them to the highest bidder, he would be rich enough to move to the Bahamas. However, the Krakken appeared, which made him decide to capture her too. He got in his mech suit, while his men tried to hold up the Krakken. As Jonah fired at the Krakken, Ripjaws appeared and started to fight him. After a long underwater battle, the eggs were taken from Jonah and were given back to their mother. The Krakken destroyed Jonah's suit and was about to kill him but he was stopped by Ripjaws. The Krakken returned to her eggs and Ripjaws punched Jonah in the face, knocking him out cold. He was then hung on a stump and left for the police.

Jonah Melville's name is based from Herman Melville, the author of Moby Dick, which involves a man hunting a giant sea monster. He is also named after the biblical figure Jonah, who is swallowed by a whale but survives.