Jetray is a red, humanoid manta ray-like alien with green eyes, grey outlines on his face, orange horns extending from his nose, gills underneath his arms, yellow patagia which he uses to fly and glide through water, grey wristbands, and two grey stripes with a yellow outline coming down from his shoulders to the Omnitrix symbol on his chest. For unknown reasons, his Omnitrix symbol is grey and white as opposed to black and white like the rest of the aliens.

In Tales from the Omnitrix, Jetray has duller colors and larger limbs during Max's story.

In Ben's first story in Tales from the Omnitrix, Jetray was a cardboard cut out.

As a toddler, Jetray resembles an egg, but in a small size and with tiny horns, patagia, and tail.

In Xingo's world, Jetray had a more cartoon look to him. The grey on his Omnitrix was recolored black.

In Players of the Lost Park, Jetray's eyes glowed purple while under the hypnosis of Zombozo.

In De-Fanged, Jetray had a long pale blonde wig and wore a blue and yellow jumpsuit that goes up to his tail and had yellow stars on the sleeves. He had red triangular marks on his patagia, a blue bracer on his left forearm, blue boots that covered his feet minus his toes, and retained the grey and yellow stripes coming down from his shoulders to his chest.

Jetray from Max's story in Tales from the Omnitrix 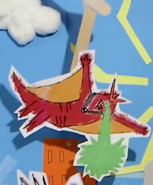 Jetray from Ben's first story in Tales from the Omnitrix 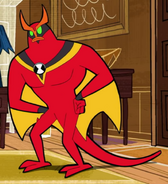 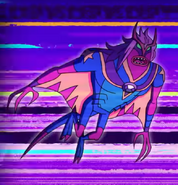 Hypnotized Jetray in Players of the Lost Park

Jetray can fly at supersonic speed, being able to maneuver through the air with little to no flapping with ease.

Jetray can fire green neuroshock blasts from his eyes and tail. In the case of the latter, he can charge his blasts in a way that allows him to leave a green trail when flying.[1]

Jetray is highly adaptable, being able to breathe underwater and survive in the vacuum of space.[2][DR 1]

Jetray has enhanced strength, as he can fly while carrying Gwen and Maurice on his back.[3]

Jetray's strength extends to his feet, which are prehensile, as he was able to carry Mary Jo Fourfeathers while flying.[4]

In addition to his feet, Jetray's tail is also prehensile, as he was able to carry Steam Smythe while flying.[5]

Jetray has enhanced dexterity, as he could operate laser tag weaponry using his tail.[6]

Because he is one of Ben's more recently-discovered aliens, Jetray may have some level of difficulty flying straight.[1]

There is a limit to Jetray's durability, as a missile was able to knock him out of the sky.[7]

Jetray's neuroshock blasts can be exploited as a power source, such as when he accidentally reactivated the Sonitrain.[8]

Heavy winds can knock Jetray back.[8]

Generating tornadoes can use up a lot of Jetray's energy, which causes him to become tired.[10]

There is a limit to Jetray's strength, as he was unable to break free from the combined grip of a Vulpimancer and a Loboan.[11]

Jetray can be knocked back by sonic waves generated by a Vaxasaurian.

Jetray's name is a portmanteau of a "jet", a fast aircraft vehicle, and "manta ray", the creature his appearance is based on. Additionally, he can fire neuroshock rays, adding to the "ray" part of his name.