Everybody Talks About the Weather

Jetray is a red, humanoid manta ray-like alien with green eyes, black outlines on his face, yellow horns extending from his nose, gills underneath his arms, yellow patagia which he uses to fly and glide through water, and two black lightning bolt-like stripes coming down from his shoulders to the original Omnitrix/Ultimatrix symbol on his chest.

In Heroes United, the black stripes on Jetray's body are straight rather than lightning-bolted. 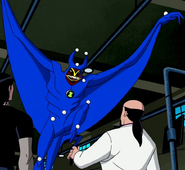 Jetray is Ben's fastest flier as he can fly at supersonic speeds. He can maneuver through the air with little to no flapping and accelerates to great speeds with ease. A side effect of this high speed flight creates a sonic boom.

Jetray is capable of surviving and maneuvering through space,[3] a task which no amount of flapping would allow. It would appear that he has an additional key to flight beyond his wings. In proportion to his size, he has a very short wingspan, although his weight is unknown.

Jetray can fire green neuroshock blasts from his eyes and tail. These blasts are strong enough to knock down a Pyronite[4] and an Amperi,[5] and even cause great discomfort to a Vaxasaurian[6] and destroy a Sonorosian with just one shot.[7]

Jetray is durable enough to withstand multiple blows from Vilgax and gunfire from a fighter jet.[8] He is also heat resistant and immune to radiation, as he could withstand a Prypiatosian-B's radioactive blasts[9] and heat generated by a Pyronite.[4]

Jetray can safely fly through the Earth's atmosphere and into space, and travel on an interstellar level. When he is done flying, he can land on his two feet perfectly.[10]

Jetray's strength extends to his feet, which are prehensile, as he is able to carry a Vaxasaurian in the air with his feet without being tired or weighed down.[6]

In addition to his feet, his tail is also prehensile, as shown when Jetray carried Gwen while flying up in the air.[13]

Jetray's neuroshock blasts are capable of starting fires, as demonstrated by Swift.[17]

Jetray is immune to electricity, such as that generated by an Amperi.[16][5]

Jetray's neuroshock blasts can hurt himself, as seen when they struck him after being deflected by the Stalker.[18]

Jetray's neuroshock blasts can be absorbed by either Prypiatosian-Bs[9] or the plasma generated by members of Ball Weevil's species, the latter of which has been demonstrated with Swift.[5]

Despite his enhanced durability, Jetray can still feel discomfort when he is being fired at.[8]

Despite his electricity immunity, Jetray can still be thrown into the air by a strong enough electric blast.[16]

Jetray is vulnerable to strong winds.[11]

Jetray's neuroshock blasts are useless against certain non-living targets, such as mechanical-like species like Talpaedans[19] and robots like Computron's minions.[20]

Jetray cannot fly in Legerdomain due to its sky being unparalleled to Earth's.[21][22]

Jetray is vulnerable to magic, as shown when he was incapacitated by one of Gwen's spells.[22]

Jetray is a playable alien in the Nintendo Wii, PlayStation 2, and PlayStation Portable versions of the game.

Jetray is initially unavailable, but is unlocked at the beginning of the Bombs Away! level.

Jetray is able to use his sonic dash to quickly cross long gaps. He can also dive underwater and move freely, something that the rest of Ben's aliens and Ben himself are unable to do.

Jetray is used at the end of the A Few Bad Eggs level to escape the collapsing facility underneath Parkville.

Jetray is vital for progression on the A Few Bad Eggs, Rural Rumble, Running on Autopilot, and A Change in the Weather levels of the game.

Jetray is a playable alien in the game.

Due to the Omnitrix rebooting after Ben's abuse of the quick-change feature during his battle with an animated Mr. Smoothy mascot, Jetray was temporarily locked until Ben's arrival in the Null Void.

Jetray is able to glide and ride on wind currents to temporarily increase his altitude like Big Chill. However, he can do so for considerably longer distances and with greater speed than Big Chill.

Tri Shot is an unlockable combo move for Jetray.

Jetray is vital for progression on the Null Void level of the game.

Jetray and Murk Upchuck are reunlocked upon Ben's arrival in the Null Void.

Jetray is able to use his sonic dash to quickly cross long gaps in the Null Void.

Jetray is a playable alien in the game.

Due to the Omnitrix sorting out after Ben fiddled with it, Jetray was temporarily locked until the beginning of Level 9.

Jetray is able to double jump and use his sonic dash to quickly cross long gaps.

Jetray is the last alien used in the game, in order to escape the collapsing catacombs after the battle with Hex.

Jetray's name is a portmanteau of a "jet", a fast aircraft vehicle, referencing his enhanced speed, and "manta ray", the creature his appearance is based on. Additionally, he can fire neuroshock rays, adding to the "ray" part of his name.