View source
watch 01:32
She-Hulk Trailer Dropped - The Loop
Do you like this video?
Play Sound

J.T. is a former bully who first appeared in And Then There Were 10 with his best friend Cash.

In the original series, he had unkempt, brown hair and brown eyebrows. He had light blue, round shaped glasses, just like Jamie, but it had a silver frame. He had a dark olive shirt and a yellow T-shirt under that. He wore light olive pants and brown shoes.

In Alien Force and Ultimate Alien, he looked almost the same as his 10-year-old-self. His eyebrows and his glasses' frame were black. He wore an olive T-shirt and beige pants.

In Ben 10 Returns: Part 1, his soccer clothes consisted of a red jersey with the number 13 on it, as well as black shorts. 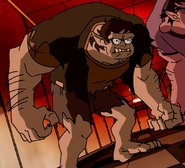 J.T. as a troll in Perfect Day

J.T. in Destroy All Aliens 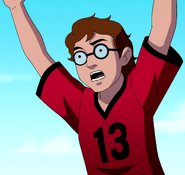 J.T. was initially a ruthless and mean-spirited bully who always picked on Ben Tennyson along with Cash. However, in Alien Force, he redeems himself after freeing Cash from Techadon Robot Gauntlet.

J.T. and Ben were best friends in the first grade before Cash moved to Bellwood and J.T. started to hang out with Cash.

JT first appeared in And Then There Were 10, where he and Cash were threatening Jamie when Ben intervened, who, along with Jamie, was hung from a tree by his underwear. Later on, Ben (as XLR8) returned the favor.

J.T. appeared in The Unnaturals with Cash as a local Little League Baseball player having gotten in as a result of four other members getting chicken pox. Ben decided to use XLR8 to get revenge on Cash and J.T. by making them look bad during the game but later helped the team tie with the Squires. Later in that episode he and Cash were captured by the Squires and nearly killed and replaced with androids but were later saved by Gwen, Max and Diamondhead.

In Destroy All Aliens, J.T. and Cash answered Ben's rhetorical question of making his life worse by locking Ben in his own locker.

J.T. reappeared in Ben 10 Returns: Part 1, when Ben beat his team at soccer.

He appeared again in The Gauntlet where he and Cash tried to bully Ben, but Ben stood up to Cash which made him very angry. This gave him the idea of pushing Kevin's car off a cliff, which they did. After they did it they ran off with the Techadon hand. He later found out the gauntlet could fire lasers, which got the attention of Cash, who took it off of J.T. When the hand started taking over Cash's personality, J.T. went to get help from Ben; During the ensuing battle between Ben and Cash, he helped Cash regain control of himself.

In Fame, J.T. and Cash appeared near the end of the episode applauding Ben of his newly revealed hero status.

J.T. and Cash appeared again in Reflected Glory where they started a blog saying that they were the masterminds behind Ben 10 and succeeded in convincing Ben, Gwen and Kevin to play along. Everything was going great for them, but when Psyphon showed up trying to destroy them as revenge (one action they took credit for was the defeat of Vilgax during The Final Battle: Part 2) they didn't want to be so famous anymore. At the end, even though they gave up their fame, they suddenly wanted it back after they saved Ultimate Spidermonkey from Psyphon using an energy decoupler, but that, their one and only heroic action, was not filmed and because of their confession earlier that no one would listen to them, reducing them to losers who were disgraces to their previous so-called "hero" titles.