Ignacius Baumann is a local shop keeper in Bellwood who sells alien provisions. He is a recurring character in Omniverse.

In Ultimate Alien, Mr. Baumann wears a light blue shirt, a black T-shirt, and black pants with a white apron. He is partially bald and has gray hair on the side of his head.

In Omniverse, Mr. Baumann wears glasses, a dark pink bow-tie and a light pink-striped yellow shirt with a dark pink apron and brown pants. He also has grown a little black mustache. He also has a pot belly.

In the Omniverse flashbacks, Mr. Baumann looked identical to his present-self, except he has full hair.

Mr. Baumann 11 years prior to Omniverse 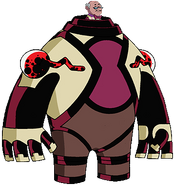 Mr. Baumann in a robotic suit

Mr. Baumann in the future

Mr. Baumann shows an irrational hatred of Ben for any damage to his property or car that was never intentional. He has a cold, unforgiving and impatient demeanor towards Ben. He is generally unreasonable,[2] seen when he scolds Ben for another accidental destruction of his car that was the result of an unprovoked alien attack.

Despite that, he helps Ben's team on occasion, such as hiding them in his store during the Incursean occupation. There are other rare cases in which he is friendly and nice to Ben, mainly whenever Baumann needs his help or vice versa. In truth, Mr. Baumann actually likes Ben deep down.[DJW 1]

Mr. Baumann has known Ben for ten years.[2] They first met when Ben's family moved into the house next to him. A five-year-old Ben accidentally set his car on fire by looking at it with a magnifying glass.

One day, Ben did 10 dollars and 1 cent damage to his lima beans stack. He was upset by the thought that Ben will still be destroying his store ten years from then. While he was driving home, he saw a shooting star that revealed to be a ship. The ship crashed into the ground next to him and a mermaid-like alien crawled out of it. He saved the alien and the two of them quickly fell in love. Unfortunately, Sheelane needs to live in very deep water so they could only meet in every 5.22 years when she sheds her skin. Baumann asked Max to hide Sheelane's ship in a lake inside a mine.

Mr. Baumann was about to make deliveries using his truck, until he sees Ben running up to battle Dr. Animo and his Mutant Mosquito. Ben remarks about the fact that Dr. Animo only brought one mutant mosquito and transforms into Way Big, picking up Mr. Baumann's delivery truck and hitting Animo and his mosquito with it. It then proceeds to fly away into space. Mr. Baumann gets angry at Ben for throwing his delivery truck into space and rips his hair out once again. Way Big sees him and starts running away.

At one point, Mr. Baumann managed to acquire some Element X to refuel Sheelane's ship, allowing for her continued survival. However, Vulkanus got wind of this and attacked his store. Mr. Baumann fled, heading for Sheelane's ship, but was followed by Ben, Max and Vulkanus. Vulkanus attempted to take the Element X, but Diamondhead managed to switch it for the canister containing Sheelane's depleted supply, placing it on his back. Diamondhead then launched Vulkanus into the cavern ceiling, where the iron ore mixed with Element X and exploded. Mr. Baumann reunited with Sheelane, who commented on Ben's destructiveness.

One year prior to Ultimate Alien

Big Chill accidentally froze Baumann's car while he was chasing a DNAlien. Ben tried to thaw it out but the car split in half.

Mr. Baumann was first seen in The Purge, when Ben and his team asked him if he knows anything about why aliens leave Earth. Mr. Baumann tells them that he has no idea, so Ben, Gwen, Kevin and Argit leave. They sneak up on him and it is then revealed that he has been hiding an alien family from the Forever Knights. He tells the gang that the Forever Knights have been attacking aliens on Earth.

At some unspecified point, Sunder got a new mask for himself from Mr. Baumann.[DJW 2]

Mr. Baumann returns in The More Things Change: Part 1, when Ben hears that off-world lowlifes are committing extortion from alien shops in Bellwood. He visits Mr. Baumann and tells him that he will protect the shop. Baumann refuses the offer, saying that Ben ruins his shop every time he is in it. Eventually, Ben manages to convince him to let him observe quietly. Ben turns into Cannonbolt and accidentally deals some damage.

When Liam, Bubble Helmet, and Fistina arrive he paid them, but thanks to Ben's intervention they planted a bomb to his store. Baumann hides while Bubble Helmet shoots lasers all over the place. He sits behind the food bar and repeatedly says that he knew it was going to happen. After a long fight, Rook and Ben defeat them and manage to explode the bomb somewhere else.

In Malefactor, Mr. Baumann appeared in Ben's dream as one of the many fans of him.

Mr. Baumann made a cameo in The Frogs of War: Part 1.

In The Frogs of War: Part 2, he was secretly part of the resistance. His store was a temporary headquarters, where Rook and Kevin collected weapons.

Mr. Baumann made a cameo in Something Zombozo This Way Comes, after everyone was changed back from being a Zombie Clown.

In No Honor Among Bros, Mr. Baumann was watching the Golden Fist Tournament.

Later, Mr. Baumann was summoned to the Galactic High Court where he was prosecuted by Starbeard. Mr. Baumann's thoughts were processed as he had history with Ben finding him to be a menace. When questioned by Chadzmuth about Ben being able to create another universe, Mr. Baumann answered that Ben can only create destruction of his property. before being teleported out of the court.

In Clyde Five, Mr. Baumann was walking by a Mr. Smoothy along with Pakmar when he heard Ben yelling "Ben Tennyson doesn't go around wrecking stuff". He and Pakmar both stared at him, insisting that the statement is not true.

In The End of an Era, Mr. Baumann was present at Max Tennyson's retiring celebration along with his wife, Sheelane.

Despite his advanced age and body structure, Baumann is surprisingly quick. He can climb walls and run fast enough to dodge attacks.

Mr. Baumann possesses a suit which was made by Azmuth himself based on the robotic suit he used to have.[3]

The suit allows him to be underwater with his fiancée anytime he wants. While the suit was damaged, it still has a lot of helpful items built-in, such as a welder and pliers.[3]