Humungousaur is approximately 20 feet tall. His body is somewhat humanoid and muscular with two arms and two legs. His legs are shorter than his arms. He has elephant-like feet and a lengthy lizard-like tail. His armored hide is light brown, with minor plating on his shoulders, tail, back, arms, and upper legs. He has a beige chest, abs, inner arms, and lower jaw. Dark grey, stone-like spikes, each shaped like the dorsal fin of a shark, run down his spine from the top of his neck to a black mace on the end of his tail. The mace has three spikes shaped like stalagmites, being one large spike on the middle and two smaller spikes on the sides. He has three fingers and a thumb on each hand and three black, elephant-like toes on each foot. His knee caps and finger joints also bulge out.

His square-like head is mostly hunched forward and the beige area of his neck is wrinkled. Both his lower jaw and brows are protruding while his almost human-like nose appears to be squished inward. His lips are black and have wrinkles. His teeth are yellowed and minorly fanged. He also has two green eyes with thick black outlines.

Humungousaur wears the Omnitrix symbol on his chest.

In Medieval Upheaval, Humungosaur wore a crystal helmet created by Diamondhead on the top of his head. 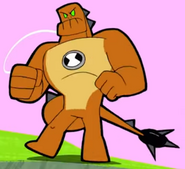 Humungousaur in The Greatest Lake 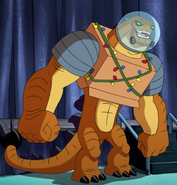 Humungousaur with a Crystal Crown in Medieval Upheaval

Humungousaur possesses incredible strength, being able to easily destroy buildings surrounding him, break free from an Incursean's tongue,[1] and hold his own against Monster Kevin (an amalgamation of the Antitrix aliens).[2]

Humungousaur possesses a thick armored hide, which has proven to be durable enough to withstand blaster fire and heavy impacts, as well as being capable of surviving the heat of re-entry into Earth's atmosphere.

Humungousaur's tail is powerful enough to create soundwaves when he slams it against the ground, that are in turn also very strong and capable of blowing away those affected within its vicinity.

On occasions, Humungousaur's tail is able to release green energy.[3]

Although he has never trained himself to do so, Humungousaur can alter his size.[DR 1][note 1]

Humungousaur's large size means he is both slow and an easy target. Furthermore, he cannot fit in tight spaces.[4]

Humungousaur's tail can cause unintentional damage if he does not watch what it hits.[5]

Humungousaur has a strength limit, as he was unable to stop himself from falling off a cliff with the added weight of Wreckingbolt. Likewise, his tail can be used against him as a way of weighing him down.[5]

Humungousaur is unable use his sonic attacks on soft surfaces such as mud.[6]

Humungousaur's sonic attacks can be exploited and redirected back at him, such as when he was launched backwards by Lord Decibel's portable sonic-based jetpack.[7]

Whilst his hide is extremely durable, Humungousaur is still shown to suffer damage from Bashmouth's bites.[8]

Humungousaur is vulnerable to the telekinetic abilities of a Celestialsapien.[9]