Hugo was Professor Paradox's partner who helped him with the time-travelling experiment during the 1950s.

When Hugo was young, he had fair skin, brown eyes, and blonde hair. When he grew old, his hair changed to white. As Paradox's assistant, he wore a white lab coat over a white shirt with a dark blue vest and pants and a black tie and shoes. He also wore goggles with green lenses around his neck, like Paradox. When Hugo was old, he wore a casual brown shirt with black pants and carried a walking stick. 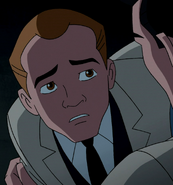 Hugo described himself as being afraid back when first performing the experiment and acts much like a normal human would in his circumstances. After living his life fully, he was no longer afraid to go with his friend Paradox.

Hugo was shown in the flashback back in 50 years ago as an assistant of the scientist, named Professor Paradox's assistant. When the project failed, a panicked Hugo stepped aside and accidentally causes the machine to suck Paradox and Hugo too, transforming him into Trans-Dimensional beast.

Hugo only appeared in the Ben 10: Alien Force episode Paradox, as a confused time-accelerating creature that ages everything it touches. Ben saves Hugo by forcing Paradox to take him back in time where he made sure that the accident that happened to Hugo didn't happen, nullifying his monstrous existence. Back in the present time, Paradox, Ben, Gwen and Kevin meet an old Hugo who apologizes to the professor about the accident and says he is now unafraid to travel in time. Paradox then takes his friend on a time-travelling journey.