Howell Wainwright was a collector of alien-related things.

Howell is a young to middle-aged Caucasian male. He has brown hair, wears square glasses, and has black dot eyes. He wears a yellow-white shirt with a single pocket and pocket protector, green pants, and a belt. He somewhat resembles a stereotypical nerd.

When he goes to Riptide Rapids Zone, he wears an orange life vest over his shirt and yellow shorts. 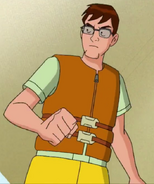 Howell with a swimsuit and life vest

Howell is very driven man. He lives alone with his cat and doesn't care about not having any friends. He heavily believes in conspiracy theories of alien activities on Earth and, upon seeing a real-life alien, will not hesitate to do what's needed to catch it. He believes that with such a discovery, he can become famous, and thinks he won't need friends then either.

Howell relies heavily on technology, automating some of the basic chores and functions of his house, such as making his lights and microwave voice-activated, and having small vacuum robots deployed whenever the floor is dirty. Howell also has an obsession for security; his house is dotted with both internal and external security cameras, and he has gone so far as to install a voice-activated laser grid in his hallway.

Howell has likely been obsessing about aliens and alien conspiracy theories for a long time. He has an entire room dedicated to alien paraphernalia and has been frequently contacting the Forever Knights organization, offering collected evidence of alien activity, likely in hopes of a position among them.

In A Small Problem, Howell travels to the Riptide Rapids Zone water park and talks with an employee, at the same time Ben Tennyson is there and gets stuck transformed as Grey Matter. Howell tells the employee some evidence suggests the water park was built on the site of a spaceship crash-landing and asks for the permission to collet soil samples. After the employee doesn't bother, he notices Grey Matter and chases after him. He kidnaps him and runs out of the park, driving back to his house. He puts Grey Matter in a glass jar and interrogates him. He excitedly contacts the Forever Knights and gets a car sent to his house. Grey Matter escapes from the jar and, after a long game of "cat and mouse", Howell recaptures him and puts him in a glass box until the Forever Knights arrive. They take him to their castle and to Enoch. Howell wants to take his alien finding to the public, but Enoch simply claims ownership of it and throws Howell out. Howell infiltrates the castle and prevents scientists from dissecting Grey Matter. He holds off some scientists, but the knights eventually capture him. Enoch brings him to their trophy room as they try to find the Tennysons. After Grey Matter rigs a power core in the room to explode, Enoch evacuates the castle but leaves Howell to die. Grey Matter detransforms into Ben and Howell helps him get his hand unstuck. The two run out of the castle and rejoin Gwen and Max before it implodes. Not knowing it was Ben, he asks them if they saw where Grey Matter went. They say no and he renounces his alien obsession.