Hex is a self-proclaimed "Dark Mage" who desires to rule the world with his vast magic powers.

Hex has grey skin with black symbols on his shoulders. His attire is like that of a tribal or a nomad. He wears a red and black dress and hood, and black pants that are torn beyond his knees. He wears what appears to be some talismans under his neck. He also has black arm guards and long socks that don't cover his heels or toes. His face is painted white and black to resemble a skull. He has black fingernails and toenails.

Hex as a snake in Story, Bored 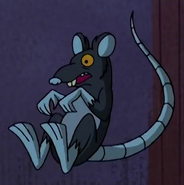 Hex as a mouse in Story, Bored

Hex in his prisoner attire

Hex in formal attire in The Hex Factor 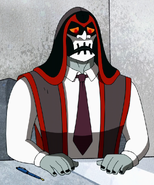 Hex as an office worker in Screamcatcher

Hex as a gladiator in Creature Feature

Hex as an Asian warrior

Hex as a knight

Hex is generally power-hungry and will go to whatever lengths to increase his powers and mastery over magic. He is often seen as ruthless and arrogant. However if someone were to save his live, he would spare them.

Hex is described as having a bad temper and lacking humor.

Hex seems to love magic, when Steam Smythe showed him a magic trick and told him about a magic club, Hex teleported out of his prison cell just to find it.

Considering his age, Hex feels like everyone in the world are stupid toddlers compared to him. He believes that under no circumstances should they be allowed to touch phenomenal magical artifacts.[KT 2]

Hex finds Ben to be a complete nuisance, since he keeps thwarting his plans for domination, especially since he is a recent obstacle in his years of attempted conquering.

Kelly Turnbull compares his feelings towards him to coming home and finding ants in your kitchen that you can't get rid of.[KT 3]

In Freaky Gwen Ben, Hex attacked the Swap Meet while looking for the Titan Gauntlets. After acquiring them, he was defeated by Gwen in Ben's body when she used Upgrade to destroy them. He was arrested afterwards.

In Riding the Storm Out, he rode a broom in the Weatherheads' galactic cyclone.

In Brief Career of Lucky Girl, he attempted to obtain the wand of Merlin, but his efforts were thwarted by Ben and Gwen, not to mention his fear of zombies.

In Story, Bored, he attacked Castle Kleinhart to steal the Grimoire of Archamada from I.J. Crowling. After taking the Grimoire, he used it to transform into Hexxus.

In Screamcatcher, he played off of Ben's greatest fears, but ultimately was trapped inside of his own: a fear of a boring, mundane, normal human life.

In Creature Feature, he brought a monster to life to attack Ben. When this almost fatally backfired on him, Ben saved his life, which forced Hex to spare Ben's in turn as part of the code that gives him his magic.

In Half-Sies, he appeared in prison with Tim Buktu, Maurice, and Sydney.

In Double Hex, he split in two in order to more efficiently defeat Ben and Gwen, but both Hexes ultimately turned against each other until they merged back into one.

In Show Don't Tell, Hex attacked Ben at the Ayasha Plinths, planning to build a Rock Golem with the people that he controlled with his magic, until Ben managed to break everyone free by lying (about not caring for Max).

It is strongly hinted in What Rhymes with Omnitrix? that Hex is the uncle of Charmcaster, who provided her with a mysterious magical rune as a gift.

Hex made Kevin his apprentice some time before The Greatest Lake. In that episode, Hex searched for a sword underwater. However, he was beaten by Ben, Max, Gwen, and Kevin.

He later appeared in The Hex Factor, where he joined a magic club, only to be angered at having to perform for people with no magic abilities. He then fights Ben as Omni-Kix Heatblast, and is soon defeated and taken back to prison.

In Ben Gen 10, Hex took control over every human being that was infected with alien DNA.

Hex is a powerful and highly skilled magician that can manipulate the forces of magic for many feats. These can range from levitation of himself and objects, projecting force blasts and defense barriers, scrying (to locate magical artifacts), control over matter and elemental forces, bringing inanimate objects to life, and teleportation.

If Hex focused enough, he could be doing magic on par with the power of Alien X.[KT 5]

In addition to his magical abilities, Hex is also very agile.

Hex can summon creatures from other dimensions as seen with Karl.

Hex is possibly immortal since he has been terrorizing humanity for over 10,000 years.

Every one hundred years Hex has to renew his powers. Around that time, he starts losing them and becomes powerless and weak.[2]

Probably some of his biggest weaknesses are his ego, arrogance, and his gullibility. He is very arrogant, and can be goaded into making stupid mistakes by hurting his ego. His general arrogance also makes him lack foresight in the event of his plans failing, and the further inability to note his flaws means he can have his own allies turn against him, even when said ally was himself.[3] Finally, Hex is quite gullible, and can be fooled by simple slights of hands or well-timed deception.

Hex is the main villain of the game.