Heatblast is the Omnitrix's DNA sample of a Pyronite from the planet-like star Pyros.

Heatblast is a magma-based lifeform whose body is composed of a bright yellow inner magma body covered by red rocks. As a fire-based entity, his body radiates high amounts of heat. His feet have a slight oval-like design with only two toes.

In Xingo, Heatblast has a more cartoony physique and a slightly altered pattern of his inner magma body.

Heatblast wears the Omnitrix symbol on his collarbone. 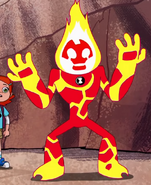 Heatblast has the ability to generate and manipulate intense heat and fire from his body. He can form fire into any shape that he chooses, commonly fireballs. He can enhance the fire in his hands for flaming punches.

Heatblast can breath fire like a dragon, as demonstrated by Hot Shot.[1]

Since he is made of fire, Heatblast is fireproof, heat resistant, and invulnerable to magma. He is also cold resistant and ice proof thanks to the heat he produces.

Heatblast has enhanced strength and durability. He can also survive being thrown through multiple buildings at high speed with no damage.

Heatblast can swim and use his powers underwater, but with a very low intensity.[2]

Heatblast can shoot a calorific laser with his two hands.[3]

Heatblast temporarily got cartoon physiology due to a lightning striking at the Omnitrix.[4]

Ironically, Heatblast can swim and breathe underwater despite being a fire-based alien.[2][5]

If exposed to enough water or fire extinguishing substance, Heatblast's fire will be extinguished, though he can still heat up and reignite his fire in short amounts of time.[2]

Heatblast can lose his fire out of exhaustion.[6]

﻿Because of his flaming head, Heatblast cannot wear anything with his head without melting them, as shown wearing glasses.[7]

﻿Because of his fiery hands, he cannot hold anything that is not fireproof without burning them.

﻿Heatblast is weak against magic, as demonstrated by Hot Shot.[1]

Heatblast is a playable alien character in the game.

Heatblast is used in the opening cutscene, where he performs his Ultimate Ability for the first time, accidentally burning the tent Grandpa Max had recently purchased.

Heatblast, along with Four Arms and Cannonbolt are the only aliens available on Ben's arsenal at the beginning of the game.

Heatblast is able to use the light radiating from his fiery body to illuminate dark areas. Heatblast will also leave scorch mark footprints everywhere he walks.

Heatblast's Ultimate Ability consists of him jumping in the air, conjuring a massive fireball, then hurling it towards enemies.

Heatblast is vital for progression on the The Funhouse level of the game.