Gwendolyn "Gwen" Tennyson is the paternal cousin of Ben Tennyson.

Gwen is a girl with short red hair, green eyes, and fair skin. She is commonly shown wearing a white shirt under a blue t-shirt with a black cat face on top, light brown shorts, and blue and white striped socks. She has blue and white converse-like shoes. She also wears a blue hairclip to pin her hair to the left side of her face.

During water-based activities, she wears a one-piece swimsuit and a pair of flip-flops the same shade of blue as her shirt.

In Brief Career of Lucky Girl, she wore a Lucky Girl outfit.

While riding on Rustbuggy, she wore a blue helmet.

In Dreamtime, she wore pink pajama pants underneath her normal shirt(s).

In Welcome to Zombozo-Zone!, she wore a light blue princess gown with a darker blue bow on the front, a matching hat, puffy sleeves and blue flats.

In Beach Heads, she wore light-blue and white swimming shirt, blue swimsuit underneath, and a pair of blue flip-flops.

In Which Watch, she wore a blue spacesuit.

In Introducing Kevin 11, she wore a grey shirt, yellow apron, and yellow and grey socks.

In Big Ben 10, she wore a deerstalker and a coat over her ordinary clothes, as a homage to Sherlock Holmes.

In LaGrange Muraille, she wore a yellow hat.

In Cirque-Us, she wore a light-blue gown with blue ribbon belt.

In Wheels of Fortune, she wore an orange vest, reading glasses with a pink frame, retro 3D glasses over her forehead, and a navy blue cat pin (obtained later in the episode).

Gwen in The Ring Leader

Gwen in Which Watch 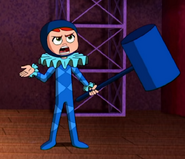 Gwen as Pirouette in Cirque-Us 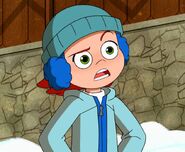 Gwen in Heat of the Moment

Gwen's head on Max's body in Heads of the Family 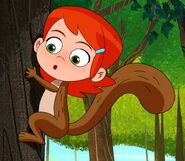 Gwen's head on a Squirrel's body

Gwen from her own story in Tales from the Omnitrix

Gwen from Max's story in Tales from the Omnitrix

Gwen from Ben's 1st story in Tales from the Omnitrix 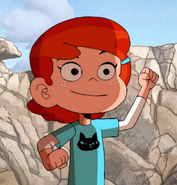 Gwen from Ben's second story in Tales from the Omnitrix 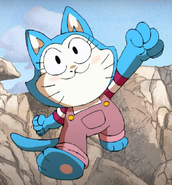 Gwen as a cat in Tales from the Omnitrix

Gwen is a remarkably smart and quick-witted girl who is the mastermind behind nearly all of her cousin's plans of defeating villains. She plays an active role as the brains of Team Tennyson. She is also wise beyond her years and often gives Ben advice.

Although she and Ben have many disagreements, Gwen often finds a way to get along with him. She is respectful and friendly towards people in general, but she is not afraid to make sarcastic comments towards whom she is arguing or disagreeing with.

Gwen is quite forgiving, considering she more worried than angry at Ben for running away.[1]

Gwen can be a bit tomboy-ish because of how she acts and speaks sometimes. Even though she is usually confident about herself, she still has insecurities about not being useful to Team Tennyson.[2] These insecurities soon leads her to join Zombozo's crew. However she got over them after she and Ben admitted to his selfishness, and started giving her credit.

Gwen has an adoration towards science, things from the 80s and 90s eras, space, and geek culture.

Gwen and Ben get along very well. They argue sometimes but they always end up forgiving each other. Gwen often tries to help Ben fight, but Ben usually ignores her info and rushes into battle. Gwen and Ben are mostly hanging out with each other.

Gwen sometimes partakes in Ben's mischievous behavior. In The Ring Leader, Gwen and Ben snuck out into a wrestling tournament, and Gwen played as his cornerman. In Omni-Tricked: Part 4, Gwen jumped into a volcano just to save Ben from Vilgax. Gwen and Ben both argue over little things, in Half-Sies, Gwen and Ben had a fight over a cupcake, which affected how they could work together in fighting crime. Gwen didn't believe Ben about Frightwig in All Wet, until she found out for herself. She later learned that she should listen to Ben more often.

In Cirque-Us, Gwen helps Ben save a worker from falling off of a lift. Once again, Ben takes the glory, despite Gwen being the brains. Gwen joined Zombozo and fought against Ben due to this. Ben and Gwen were able to talk it out, and Ben started giving Gwen more of the credit.

Gwen is used to Ben screwing up.[3]

Max mostly takes Gwen's side when Ben and Gwen argue. Gwen and Max sees each other as "team destroy", since they've destroyed so many things villians have created over the summer. Max and Gwen are also pretty playful with each other, as shown in Reststop Roustabout when Max and Gwen were playing outside with flags.

Charmcaster hates Gwen very much. However, Gwen does not share the same feeling. Charmcaster tries to take Gwen out on multiple occasions, but fails each time. In The Charm Offensive, Gwen helped Charmcaster after seeing she was being used by Micheal Morningstar.

Gwen seems to be oblivious by the fact that Kevin has a crush on her. Gwen doesn't share the rivalry that Ben and Kevin has. Gwen felt very sad for Kevin after hearing about how no one ever took him to Adrenaland. After all three of them went on a rollercoaster ride together, Kevin balled up a pic of the three having fun. Gwen still felt sorry for what was going on with Kevin. However Kevin saved the picture.

At some point her and the rest of Team Tennyson encouters Hex, Animo, and LaGrange and become enemies.

In Waterfilter, Gwen tries to become Ben's filter, although Ben hardly listened to her. The trio worked together to take down the Hydromander.

In The Filth, Max and Gwen explores the bat-guano caves, while Ben stays behind and Cleans the Rustbucket.

In Freaky Gwen Ben, at a flea market, the trio runs into Hex. Gwen and Ben's bodies are switched by Hex. Gwen uses Upgrade to defeat Hex. Hex switches their bodies back.

Gwen, Including the rest of the Tennyson trio, encounters Zombozo for the first time in Clown College.

In Rustbucket RIP, She alongside Ben and Max travel to historic Oldville, there they meet Billy Billions for the first time.

In Bright Lights, Black Hearts, Gwen was brought to the set of The Unalivers, staring Michael Morningstar. Soon Gwen gets some alone time with Michael. She asks him questions about the movie, but he reveals that he doesn't like it. Gwen walks away disappointed. Micheal attempts to feed off her energy, but Gwen is able to fight him. Gwen eventually figures out that in order to beat him, Heatblast. Has to steal the spotlight. Gwen helps encourage Heatblast, and eventually ends up defeating Micheal.

In Omni-Tricked, Gwen and the rest of Team Tennyson tried to figure out what was wrong with the Omnitrix. When Ben faced Vilgax inside a volcano, Gwen jumped in attempting to be his back up. However she is thrown back up by Four Arms. After Vilgax was defeated, Gwen listened to Ben's story about how he defeated him.

In The Charm Offensive, Gwen and Ben visits Biggie Box. A kid, with his dad, walks up to Ben and admires his heroics. Gwen tries to say she helped out too, but they don't seem that interested. Gwen walks around eating ice cream, looking for something to cheer her up. She hears someone say her name. Being caught off guard, her ice cream is transformed into a monster by Charmcaster's magic. Gwen runs away thinking Ben made someone mad. Charmcaster gets a hold of Gwen, and reveals her backstory. Michael Morningstar shows up and tries to feed on Gwen. Michael keeps attempting to drain Gwen, but gets no luck. Charmcaster shows up and tells him that Gwen is a nobody, and that she isn't worth it. Michael begins to drain Charmcaster, but Gwen stops him. Gwen tells Charmcaster that Micheal is just using her, and she should dump him, but Ben, as Four Arms, shows up and attacks Michael. Michael starts to feed on Charmcaster again. Gwen tells Omni-Enhanced Four Arms that Charmcaster needs to see for herself that she is being used. Gwen finds a remote to the TVs displayed in the store, and shows a recording of Michael revealing how he's using Charmcaster. Soon Michael is defeated by Charmcaster, and Charmcaster tells Gwen that they are still enemies.

In Charm School's Out, she switched appearances with Charmcaster. Gwen was however unaware of this. Soon she runs into Ben who chases after her. He transforms into Rath and chases her through the forest. Eventually Ben times out, and runs away, calling her Charmcaster. Gwen is confused on being called Charmcaster, to which she takes a picture of herself and finds out. She finds Ben and tries to reason with him, but Ben wasn't believing her. Eventually Gwen reveals Ben's favorite snack, which gets Ben to believe her. Gwen's body then returns to normal, and so does Charmcaster's. Ben then chases off Charmcaster, who is then picked up by someone in a ship.

In Which Watch, Gwen enjoys her time in a space camp. Ben returns to the camp telling her that he was fighting of Kevin, and some glowing tentacles grabbed him. Soon, Kevin arrives as Hot Shot. It is soon revealed that Charmcaster is forcefully controlling him to get revenge on Gwen. Charmcaster casts a spell to make it appear that they are in space. Gwen and Ben goofs around until Charmcaster shows up. She then mutates Kevin, and he and Ben fights. Gwen gets an idea put of Kevin's fire breath. She moves over to where Charmcaster is, and takes her book. She then throws the book towards Ben, who forces Kevin's fire breath to burn it. Soon Charmcaster removes the spell, sending Gwen, Ben, and Kevin towards Earth.

She is still a very athletic kid, however: she was the only one to finish the obstacle course in Rath of Con, even though the other contestants were all adults. She also picked up some Capoeira moves, making her able to keep up with Humungousaur.

She is prone to succeed when trying new things, often picking up new hobbies each episode.

Gwen is slightly more durable than an average human.[2]

Gwen is remarkably good with technology.

Cat Pin: Gwen used a suit that was given to her by Phil[5], though it was later destroyed by Forever Knight.[1]

Hammer (piruette): In the episode Cirque-Us, she uses a big blue hammer to fight Humungousaur.

Lucky Girl cosplay outfit, only shown in Brief Career of Lucky Girl until the third season.

Even though she's slightly more durable than an average person, she still has limited agility, strength, and thinking.

She was afraid of Snakes until King Koil.

Retrieved from "https://ben10.fandom.com/wiki/Gwen_Tennyson_(Reboot)?oldid=1030756"
Community content is available under CC-BY-SA unless otherwise noted.