Gwendolyn "Gwen" Tennyson is an Anodite Plumber, the paternal cousin of Ben Tennyson, and was a main member of his team during the first 3 shows.

In the original series, Gwen had short red hair held by a blue hair clip and green eyes and wore a blue raglan shirt with a cat logo on her chest, white capris, and a pair of white shoes with dark blue stripes.

In the first and second seasons of Alien Force, she wore a white shirt under a dark blue sweater, black stockings under a black mini skirt, and black high heels. Her hair had also grown longer and was down to her waist.

In the third season as well as The Transmogrification of Eunice, she wore a red shirt paired with a black vest, gray pants, and black flats. Her hair was worn in a high ponytail.

In Ultimate Alien, Gwen's outfit was similar to her outfit from the first two seasons of Alien Force, but with a red sweater instead of a blue one.

In Ultimate Alien, she wore a standard Plumber suit during a few of her off-world excursions.

In the first episode/season of Omniverse, Gwen still had her ponytail, but it was much shorter. She wore clothes similar to her Alien Force Seasons 1-2 outfit, except she now wore long white socks that went up to her knees with black mary janes. She also had freckles.

For the rest of the series, she has shorter hair with a blue hairclip, a light blue T-shirt with her cat logo on it, a blue plaid miniskirt and wears blue-tinted glasses. She also wears long white socks and blue sneakers.

11-year-old Gwen in Omniverse looks just like she did in the original series except that she has freckles and the cat logo on her shirt is now bigger.

In Alien Force and Ultimate Alien, in her Anodite form, she looked like a slightly smaller version of Verdona.

In her new Anodite form in Omniverse, her skin turns purple, but her hair remains the same length, but is now made of mana and is pink and her eyes also turn pink. Her glasses also become a blue mask and she now wears blue gloves and her shirt is a darker blue with a light blue stripe. Her shirt cuts off and reveals her midriff and naval. She also wears blue boots, a dark blue miniskirt with a light blue stripe and a belt. The cat logo on her shirt also becomes black with pink eyes.

Her Lucky Girl outfit is worn in Lucky Girl, Tough Luck, Time Heals, and Enemy of My Frenemy.

During water-based activities in the original series, she wore a purple one-piece swimsuit with a light blue diagonal stripe across her midriff in A Small Problem and a teal green one in Divided We Stand.

In Secret of the Omnitrix, while trying out clothes at the mall, she wore yellow-tinted glasses, a light blue collared shirt, a blue vest, black pants, and red and white shoes.

In Ben 10 Returns: Part 1 and It's Not Easy Being Gwen, she wore her karate uniform.

In What Are Little Girls Made Of?, she wore a white bikini.

In Save the Last Dance, she wore a white dress.

In Birds of a Feather, when on the Moon, she wore an orange spacesuit with four arms.

In In Charm's Way, she wore a black bikini.

In Escape from Aggregor, she wore a pale blue winter coat and blue pants.

In Basic Training, while at the barracks in the Plumbers' Academy, she wore an olive tank top and black shorts.

In It's Not Easy Being Gwen, she wore a grey T-shirt and black running shorts during her morning run.

In Inspector 13, Gwen wore a violet tank top with a white skirt and tennis shoes.

Gwen in A Change of Face

Gwen's mall outfit in Secret of the Omnitrix

Gwen in her karate uniform in Alien Force and Ultimate Alien

Gwen in a white dress in Save the Last Dance

Gwen in an orange spacesuit in Birds of a Feather 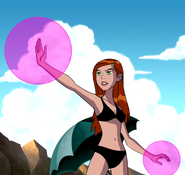 Gwen as Lucky Girl in Alien Force and Ultimate Alien 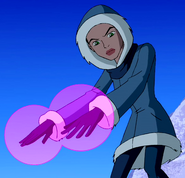 Gwen in a winter coat in Escape from Aggregor

Gwen in a Plumber suit in Ultimate Alien 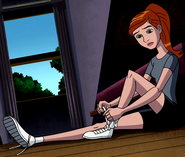 Gwen's jogging outfit in It's Not Easy Being Gwen

In the original series, Gwen is portrayed as an intelligent, mature but usually stubborn and smart-mouthed when it came to talking with Ben. Her quick thinking and good instincts give her an edge in dealing with dangerous situations. However, she's sometimes too trusting with people who want to exploit her good will, leading her (or others) into harm's way.

As she got older, she became even more mature, as well as becoming more caring and sympathetic. Her affection towards her cousin Ben, became more clear as well.

Gwen is willing to forgive villains for their wrongdoings, the most notable being Kevin, if she believes they've changed for the better. Although her intelligence and knowledge have only increased since the original series, she's not completely free of her naivete, and can be arrogant at times as well.

Despite being far more mature and reasonable than Ben and Kevin, Gwen is somewhat hotheaded and can lose control of her mana if angered enough.[1]

Gwen occasionally prioritizes things incorrectly,[2] seen when she put more importance on Ben arriving to Julie's tennis match on time than stopping the Forever Knights' armed robbery of a museum.

Gwen's magical powers are of alien descent from her grandmother Verdona, a member of a free-spirited alien race of pure energy beings known as Anodites, from the planet Anodyne. Gwen didn't inherit the powers, but shares a knack for mana manipulation, possibly because Verdona manipulated mana in her human form.[DM 1]

Verdona tells Gwen that, like herself, Gwen is also an Anodite; she has "the spark" and thus is able to freely manipulate and control mana, the supernatural Force-like life energy that is present in all living beings throughout the universe.[3]

Gwen can create energy blasts, streams, waves and bolts, as well as energy force-fields, shields and barriers. Her powers are mainly used like energy constructs, allowing her to make many different types of structures like, hammers, protective helmets, battering rams, beams to grab and throw enemies, stepping stones/platforms to carry her and others though air, safety nets, magic weapons: swords, blades, punches, etc.. It also turns out Gwen can also synchronize her martial arts styles with her energy manipulation abilities.

Gwen has more mana-related powers: She can find any person she wants by detecting the traces of mana that he/she left.[4] She can distinguish Ben and Albedo by reading their auras.[DM 2] She can also draw in mana from everything around her. She also has a degree of enhanced strength and durability.

She also has the abilities of telekinesis, teleportation, heat vision, clairvoyance, telepathy and healing herself and other living beings. She can also transform into an Anodite.[5] In her Anodite form her powers are greatly enhanced, giving her the abilities of flight and size alteration.[6]

In addition, her Anodite powers get stronger over time.

On two occasions, Gwen used the five mystical Charms of Bezel to become a superheroine by the name of Lucky Girl. At first, her power and ability drew from the luck-granting Charm of Bezel, which innately gave her complete and perfect luck in everything she did. While wearing the charm, any action she took would result in a chain reaction benefiting her original intent, but usually injuring Ben in the process. She later brought back her superhero identity in the episode Tough Luck after obtaining the legendary lost Keystone of Bezel, which greatly increased her natural abilities to superhuman levels rather than just affecting her luck. Both times, Gwen was forced to retire when the five Charms and Keystone of Bezel were destroyed.

Gwen claims that being self-taught in magic is not so easy as it looks.[7] Trying to get into Yahwahtacsip she mistakes its name for "Wah Di Tah", saying that she knows how to read it but not pronounce it correctly.

Later Gwen begins to cast spells and recite spoken incantations again.[8] Gwen is less knowledgeable than Charmcaster and Hex, having been self-taught, but she is also more powerful than Charmcaster until Charmcaster obtained the Alpha Rune, after which she was powerful enough to defeat Gwen with ease.

She has also learned to astral project through magic, like when she found Ben inside the Ultimatrix.[9]

Gwen is a capable gymnast and martial artist. Even in the original series, she was occasionally shown to be quite good in hand-to-hand combat fights against enemies who had normal strength levels. She was part of her school's Jujutsu team. At the age of fifteen it is revealed that she has already received a black belt in Taekwondo.[11]

When preferring to use her athletics during fights or when she cannot rely on her magical and Anodite powers, she is shown to be highly skilled in hand-to-hand combat.

Gwen does martial arts, horseback riding, softball, skiing and cross country.[DM 3] Gwen has been shown creating a whip of mana energy and using it as a weapon along with her fighting skills. When Kevin asks her how she learned it, she states remembering it from an old movie.[12]

Gwen is very intelligent and knowledgeable. Before discovering her dormant Anodite powers, she would often use her superior intellect to help Ben solve problems. She is shown to be a bit of computer and tech wiz as well. She has her own laptop which she uses to research enemies she meets.[13]

Gwen has appeared in every action pack, except for Old Friends, Plumbers' Kids, It's a Set Up and twoSome.

Retrieved from "https://ben10.fandom.com/wiki/Gwen_Tennyson_(Classic)?oldid=971986"
Community content is available under CC-BY-SA unless otherwise noted.