Gutrot has the appearance of a mechanical humanoid in a green outfit, with the exception of his head and shoulders being a bluish-purple color. He has four fingers on each hand, which are apparently gloved. Like Water Hazard, he has nozzles/openings, from which he can eject gas. He has two on both of his arms, one on each of his shoulders, three on the rim in between his shoulders, three on his head, one on his back and one  in the center of his posterior. He has a belt with a window on his stomach so that the gas he uses can be seen.

Nega Ben's Gutrot looks the same as Prime Ben but his skin is pink. His eyes are grey, his outfit is pale blue and his Omnitrix symbol is also grey. 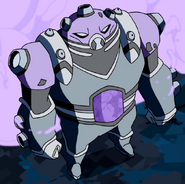 Gutrot has a cynical sense of humor and speaks with a gruff tone.

1 of 5
Add photo
Gutrot's innards contain various gaseous elements, making him a walking chemical laboratory. Gutrot has the ability to make compounds of almost any type and expel them as gas from the various nozzles on his body for both offense and defense.

Such gases include the following:

The strength of these gases depends on the amount expelled and their chemical makeup.

Gutrot also has a very advanced knowledge of chemistry as well as the effects the gases would do to someone; this knowledge seems to be innate since Ben as Gutrot said not to ask how he knew, indicating that like when he turns into Grey Matter, he may not fully understand what he is doing from his personal view. Furthermore, he also seems very intelligent in general, as he was discussing the ramifications of time travel with Rook and Chrono Spanner, as well as explaining that hitting someone on the head would simply result in a concussion rather then amnesia. Gutrot's use of pheromone gas also demonstrates some degree of biological knowledge, given that he understood a species enough to create a gas that specifically targeted it.

When Gutrot uses his gas, it makes a large cloud, which is susceptible to prevailing winds. This can endanger innocent bystanders.

Opponents who are effectively shielded are immune to Gutrot's gases, mainly through the use of a gas mask or insulation.

Gutrot's name is a reference to "Rotgut", a name shared by several fictional characters. Rotgut is also a Prohibition-era slang term for homemade alcoholic beverages, in reference to his power to mix chemicals inside himself.

Retrieved from "https://ben10.fandom.com/wiki/Gutrot?oldid=634311"
Community content is available under CC-BY-SA unless otherwise noted.