Gorvan is a Tetramand criminal who first appeared in Special Delivery (His debut being the Ben 10: Alien Force video game).

Gorvan is is shorter than average and overweight for a Tetramand. He wears a lime green and black jumpsuit, grey belt, and two pairs of gloves.

In his disguise, he wears a Plumber Suit with a visored helmet and two sleeves large enough to fit two arms each, making it appear as if he had only two arms.

Gorvan in a Plumber suit 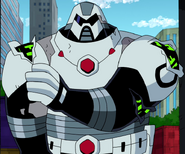 Gorvan in a damaged Plumber suit

In the Alien Force video game, Gorvan is a competent, scheming, and secretive mastermind, having manipulated the team into helping him gather components for the Highbreed Weather Array. He also admits he could stand to lose a little weight.

In Omniverse, Gorvan is ill-tempered and impatient. He appears to be cowardly, especially when defeated.

Gorvan makes his first appearance around the second half of the first level, the warehouses at the Amusement Pier fighting off the Forever Knight battalion hunting for the same uncatalogued alien technology the scanner in Kevin's car detects. After Ben helps him defeat the rest of them, he reveals that he knew Max Tennyson before his "sacrifice". Gwen and Kevin meet up with Ben and Gorvan explains that he's a Plumber sent to Earth on an urgent mission regarding the investigation of the HighBreed invasion. Their plan mostly involves collecting pieces of alien technology, such as the artifact the scanner in Kevin's car detected; an extremely dangerous Pyronite plasma oscillator, the first of many puzzle pieces for the Highbreed's master plan. The team agrees to help and they follow him back to his hideout at the local Easter Mountain Plumber Base. Upon arrival, his long-range computer detects more of the alien devices he claims he's been sent to retrieve, starting with a Petropian focusing array in the Forever Knights stronghold in Avalon Forest. So, Ben and Kevin head out to retrieve it.

They return with the device and Gorvan forcefully snatches it from Kevin to lock it in the lower level for safekeeping. Gorvan sends the team to Fort Harper, a military base and missile test site far out in the desert to retrieve the next device in the hunt that was uncovered yesturday in the hunt. He explains that this device is part of an industrial water conditioning system used on aquatic planets to lower ambient temperature around geothermal vents, and instructs them to make haste before someone else finds it. That someone happens to be Vulkanus, who Ben manages to defeat and score the device from.

Upon reporting to Gorvan, he says that Vulkanus has been meddling in his business for quite a while, and says that he will be "dealt with" in due time, which does nothing to put the team at ease. When he leaves to put the device away with the others, Ben agrees with Kevin's suspicions that there's something Gorvan is keeping secret from the team, and they agree to do some digging in the computer to find out what it could be while he's distracted for a while. However, Gorvan returns with their next mission to Parkville and sends them on their way while he meets with his contact to give a Plumber's progress report in person. When he leaves, Ben takes the mission while Gwen and Kevin do their research.

Upon returning with the device, he immediately guesses the password for a file recorded by Max about Gorvan about five years ago. While he was indeed a Magister-ranked Plumber, he's really a thief who's been stealing missing alien technology and sold and destroyed it before Max could recover it. Soon after Gorvan disappeared without a trace. At the end of the log, the team realizes that Gorvan is a fugitive hiding on Earth with no full-time Plumbers and he's been manipulating the team into recovering those uncatalogued alien technological components for his own personal gain. When Kevin heads down into the caves to hunt him down, he finds a room with HighBreed-level equipment and filled to the brim with xenocite eggs. When Gorvan finds out the team has seen past his charade, he locks Kevin inside the vault and leaves him at the mercy of the horrible bloodthirsty parasites. Ben manages to find him and subdue him long enough to get the xenocite off of him, and he proceeds to hunt down Gorvan. Finally reaching the lowest level of the base, Ben finds Gorvan and he reveals that he's been working for the HighBreed the entire time. Ben finally fights Gorvan to the finish and after subduing him, secures him in one of the holding cells below the control room.

In Special Delivery, Gorvan appeared in the background of Psyphon's auction.

In Mud Is Thicker Than Water, it was revealed that Gorvan was the spy who had infiltrated the Plumbers so he could supply Psyphon and his thugs with the latest Plumber technology and the Annihilargh. In a raid, Gorvan was thrown out of the Plumber ship by one of Psyphon's goons to avert suspicion, angering him in the process, and unknowingly leading the Plumbers to their hideout. He then fought Gwen but was defeated by her. He was then arrested by the Plumbers.

In Universe vs. Tennyson, he was watching Ben's trial from Khoros.

In Weapon XI: Part 1, Manny and Helen were about to take Gorvan into custody, but Phil and Leander appeared and attacked them. The unconscious Gorvan woke up and got away.

In Stuck on You, Gorvan is hanging out at the Black Hole when Khyber comes looking for Skurd and temporarily gets his DNA fed on, sprouting four arms identical to his out of his head. When Khyber explains that he wants to work with Skurd and presents him the Nemetrix, he abandons Gorvan, who weakly falls to the ground.

He has all the standard powers of an average Tetramand.

Gorvan appears in the Ben 10: Alien Force video game as a villain. He is a renegade Tetramand Plumber who abandoned his duty and started selling alien tech to the highest bidder.

Ben first meets Gorvan where he was fighting a group of the Forever Knights, where he is after a mysterious component. Gorvan enlists Ben, Gwen and Kevin's help to find the rest of the components. He claims to be a Plumber (as he had a Plumber badge on his left pectoral) and even knew Max Tennyson.

Secretly, Gorvan was working for the Highbreed, though there was no indication he was aware of the Highbreed's true plans as much as the Forever Knights were. He is also on the run from the Plumbers. He tricked the trio into invading a Forever Knight's castle and fighting Vulkanus and his Pickaxe Aliens for another component.

Gorvan turned Kevin into a DNAlien and made him fight Ben, but luckily, Ben was able to defeat Kevin and change him back to normal. Gorvan then fights Ben, and used a machine capable of refilling and increasing his stamina. Ben was still able to defeat him, however, and kept Gorvan captive with some holding-cells.

It is unknown what happened to him after the game was over, though it seemed that he was put into Plumbers' captivity. What is stranger is that Gorvan was enemies with the Forever Knights, despite both of them being allies of the Highbreed.