Gordon Tennyson is the brother of Vera Tennyson and Max Tennyson, as well as the father of Joel Tennyson. Unlike Max's side of the family, he, his wife Betty Jean Tennyson, and their son, are all members of the Plumbers.

Gordon bears a resemblance to his brother Max, but is more well built. He has gray hair, a gray mustache, and hazel brown eyes. He wears a brown jacket over a white shirt as well as blue pants and a brown belt. He wears a black hat with a horizontal brown stripe.

During the wedding ceremony, he wore a black tuxedo with a red bow tie.

As a young Plumber, he had no facial hair and wore a Plumber suit, along with a gray hat with a horizontal brown stripe.

Gordon in a black tuxedo 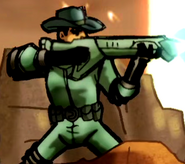 Gordon as a young Plumber

In Big Fat Alien Wedding, his son Joel marries a Lenopan named Camille, putting an end to a long feud between the Lenopans and the Plumbers. Both Gordon and his wife were against the wedding at first (due to Camille being a Lenopan), but later realize they had treated her unfairly and apologize, accepting her into the family.