Protect Galvan Prime and Galvan B from threats and criminals

The Galvan Soldiers are a group of Galvan in charge of defense of Galvan Prime and its moon, Galvan B. As it was revealed in Blukic and Driba Go to Area 51, the soldiers are mostly Plumber cadets.

The Galvan Soldiers wear green armor and helmets. Their arms, legs and necks have metal covers. They also have fingerless gloves and an Omnitrix-like crest on their chest.

Most of the Galvan Soldiers have grey jetpacks with two Galvan-like eyes on them, equipped with a communicator for contact with one another.

Galvan Soldiers carry laser pistols in the shape of a wrench.

Galvan Soldiers use catch poles to hold aliens like Zed.

Some Galvan soldiers can navigate walkers that shoot out some sort of green liquid. The walkers are grey, they have two Galvan eyes and an Omnitrix symbol.

Galvan Soldiers have prison cells for the transport of prisoners.

The crests on their chests are Universal Translators.[1] 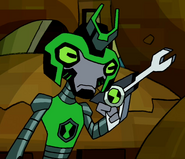 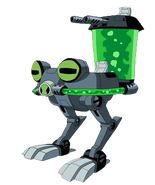