Be Afraid of the Dark

Frankenstrike, formerly known as Benvicktor, is the Omnitrix's DNA sample of a Transylian from the planet Anur Transyl in the Anur System.

Frankenstrike has an appearance similar to the classic depiction of Boris Karloff's version of Victor Frankenstein's monster. In the original series, he had a muscular body with a human nose, dark greyish yellow skin, a black mullet hairstyle with brown at the end, sideburns, and two tower-like conductor coils on his back. Frankenstrike wore black pants with lines on them, with a triangle dash in the middle, that glowed green. He had stitch-like lines on his arms (right arm: half of his shoulder and left arm: halfway from his glove). He had brown gloves with his fingers showing, and had three black and green bolts on his chest and one black bolt on each side of his neck, with all bolts having a green line on them. He had white lines on his waist that connect to the Omnitrix symbol like a belt clasp.

In Ultimate Alien, Frankenstrike's skin was completely grey, as were his gloves, tower-like wire coils and the bottom of his shoes. His belt was also grey and a grey hexagon was where the Omnitrix symbol used to be. The bolts were grey and had no green line on them. The Ultimatrix symbol replaced the top bolt in the triangular shape made by the placed bolts on his chest.

In Omniverse, Frankenstrike's hair is now shorter, lacking bangs and a mullet, but still has evident sideburns. His skin has several uneven seams, combining grayish-yellow skin with darker grey skin. He also has large pink scars across his chest and right arm. He retains the bolts on his neck, but no longer has them on his chest; instead, he has one on each shoulder, elbow, and three in his back. The bolts are now bronze, and resemble a fathead screw with a green light in the crease. His belt is now green with white stripes, which have white bolts in them, and another bolt as a buckle. His turrets are now green with screws on them, and the coils are now white and feature green bulbs at the tips. His gauntlets are now green with bolts on their knuckles, his pants are now a greenish-black color, and his "boots" are now copper with three green slits in them. Frankenstrike's teeth are now yellowed and uneven, and bear out when he speaks. His Omnitrix symbol is embedded in the flesh of his right pectoral, with several deep scars protruding from where it resides.

Benzarro's Frankenstrike looks identical to Ben's except he has different colors. His eyes, bulbs, and electricity are colored lavender. His body color is slightly different, resembling Benzarro's colorization and everything that is green on regular Frankenstrike, is purple on him. 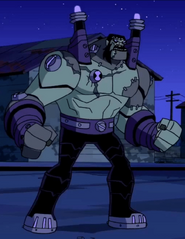 Frankenstrike has an electromagnetic body with two conductor coils on his back that allow him to generate and manipulate green lightning and electromagnetism.

Frankenstrike can emit powerful lightning bolts and emit magnetism from his hands or his feet, allowing him to attach to metal structures.[1]

Frankenstrike can emit his lightning in the form of waves that can travel along flat surfaces.[2]

Frankenstrike possesses enhanced strength, as he was able to punch through the body of a Techadon robot as well as knock its arm off.[3] He also has enhanced durability, jumping, reflexes, and dexterity.

Frankenstrike can enhance his physical attacks by giving them an electrical charge.[4]

Frankenstrike can survive in the vacuum of space.[1]

Frankenstrike has a form of technokinesis by connecting himself to machines with his conductor coils to control them. He can do so with his electricity as well.

Although he has never trained himself to do so, Viktor is resistant against extreme heat.[5]

Frankenstrike can be harmed by the impact of another Transylian's electrical attacks, as shown when he blasted Dr. Viktor with a charge strong enough to send him flying into a Null Void portal.[1]

The two generators on Frankenstrike's shoulders are the source of his electricity, which means opponents like Phil can absorb his electricity through them.[4]

Frakenstrike is unable to fit through small or tight spaces.[2][6]

His placeholder name, Benviktor, is a combination of "Ben" and "Vicktor".

The name Frankenstrike is a combo of the name of Frankenstein and the word "strike", as in a lightning strike.