The Forever Knight was a mysterious armored knight who appears in Ben 10. Over the course of season 3, he recruits enemies of Team Tennyson to join his cause.

The Forever Knight wears metal armor partially inspired by medieval European knights. It is augmented with alien technology that affords him great maneuverability and speed that would otherwise be inhibited by the clunkiness of the armor. When damaged, the yellow strips of light fade and turn off. He has yellow lighting on his helmet, and he wears a cape along with his armor. He also bears the Forever Knight symbol on his chest, resembling the classic continuity's Forever Knights. Beneath his mask he is a white male of indeterminate age with no facial hair.

Forever Knight with a cracked helmet 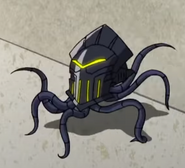 Forever Knight after his consciousness was transferred to his helmet

The Forever Knight is brash and arrogant. He spies on Team Tennyson and their many enemies, including Simon Sez, Charmcaster, Vin Ethanol, Billy Billions, and Kevin Levin, deciding which ones are worthy enough to join his cause.

The Forever Knight feels disgraced whenever Kevin disobeys his orders, and makes fun of him and Ben for being children in possession of uncontrollable power.[3]

His goal is to go back in time and prevent alien signals from contacting Earth.[4] Throughout Season 3, he tests Team Tennyson's enemies to determine those he needs for this goal. He needed Ben and Kevin to power his time gateway due to both of them having Kineceleran forms in their Omnitrices, Charmcaster to stabilize the portal with her magic, Vin Ethanol to monitor Ben and Kevin's progress, Billy Billions to provide his drones as security, and Simon Sez to help activate the gateway.

The Fover Knight has been watching Ben ever since the beginning of the series.

The Forever Knight first appeared in Omni-Copped, when he instructs Steam Smythe to intercept the Tennysons and observes his defeat at the hands of Ben Tennyson.

In This One Goes to 11, the Forever Knight sees footage of a defeated Kevin, remarking that Kevin would been an even better candidate than Ben.

In King of the Castle, the Forever Knight reached out to Kevin after his battle with Ben, only for the boy to turn him down out of claiming that Kevin does not need his help.

In Don't Touch, the Forever Knight battled Ben over a katana only to get his helmet damaged and knocked over the horizon by Humungousaur. The Knight appeared to be smiling at the exact moment Humungousaur threw him off far away with his tail, possibly showing that he was trying to see if Ben was worthy of being recruited.

In Welcome to Zombozo-Zone!, Zombozo tried to impress the Forever Knight in hopes of joining up with him. The Knight remarks that he never was a king as Zombozo is arrested, suggesting that he has no intention of bringing Zombozo into his team.

In Bridge Out, the Forever Knight orchestrated a traffic jam by forming a blockade. After Simon was stopped, the Knight called off the blockade, knowing that Simon can be useful; Simon would eventually join the Knight off-screen.

In Charm School's Out, the Forever Knight recruits Charmcaster to his cause.

In Franken-Fight, the Forever Knight scolds Kevin for failing to defeat Ben due to his romantic interests in Gwen only for Kevin to destroy the transponder hidden on his padlock necklace.

In Buggy Out, the Forever Knight sent Kevin to steal the Rustbucket for its technology, though the boy ended up failing due to interference from Ben and Glitch. Kevin then attempted to use Glitch to run over the Tennysons, forcing the Knight to attack Kevin in retaliation, though his jetpack as blasted by Heatblast.

In Introducing Kevin 11, Kevin officially joined the Forever Knight's side, having abandoned his pride in favor of jealousy towards the Tennysons.

In Forever Road, the Forever Knight offered to help LaGrange by giving him a remote that would sabotage Ben's transformations, and orchestrated a race in the desert in which the victor would become the next member of his team. Although the remote was destroyed and LaGrange was defeated, the Knight was able to instead recruit Vin Ethanol in the racer's place.

In The Night Ben Tennyson Came to Town, the Forever Knight continuously torments Ben to the point where Gwen and Grandpa Max are unable to believe the Knight exists. He also sees a way to get Ben to join him: his delusions towards his family refusing to trust him.

In Prey or Play, the Forever Knight invites both Ben and Billy Billions to a theme park called Adrenaland. In the end, Billions joins his team.

In The Bentathlon, the Forever Knight abducts the Tennysons and has Ben fight against Iron Kyle, Queen Bee, the Alien Chef trio, the Ground Hawg Gang, and Kevin in a series of gladiatorial matches. Ben is ultimately the victor of each and every fight and is rescued by Gwen and Max.

In Heads of the Family, Ben (while his head is on Kevin's body) receives a phone call from Forever Knight, instructing him to report back.

In Roundabout: Part 1, Ben ultimately joins the Forever Knight out of having enough of Gwen and Max refusing to trust him, to Kevin's confusion. They and the rest of the Knight's team- Vin, Charmcaster, Billions, and Simon- infiltrate a laboratory in Switzerland and construct a time gateway. Ben is chosen to accompany the Knight after he defeats Kevin, Charmcaster, and Billions. When Gwen, Max, and Phil came to the lab in search of Ben, the Knight has the rest of his team deal with them while he and Ben venture through time.

However, when he reveals his plan in Roundabout: Part 2, Ben immediately turns on him out of not wanting the Knight to prevent the Omnitrix from making its way to Earth. Forever Knight overpowers Four Arms in Ancient Egypt and Diamondhead in Renaissance Italy, allowing alien contact within both eras to fail. Forever Knight then takes Ben to the final era, where a young Max and Phil attempt to contact aliens, and overpowers Shock Rock. However, before he is able to change history, Gwen and Dark Matter appear and help Ben, with the latter interested in payback for the Knight neglecting him.

The combined interference of Rath, Gwen, and Dark Matter enables history to remain unchanged and the Knight's plan to fail. Whilst traveling through space and time, the Knight battles the likes of Rath and Crystalfist before pursing the children through a time portal leading towards the present. Kevin ultimately sacrifices himself to trap the Knight, leaving their current whereabouts (and when-abouts) unknown, especially since only the Knight's helmet came out of the still-open time gateway.

While Kevin manages to escape the portal intact, the Forever Knight does not, as revealed in Cosplay Day. It turns out that his consciousness ended up transferring into his helmet. During said episode, he returns at a cosplay convention in which he seeks a new 'host' within his new parasitic-like form in his helmet. As he continues to run rampant across the convention after his cover has been blown, he takes possession over Steve's body, using his influence as a judge to abruptly end the competition and force everyone to go home to cover his getaway. Ben as Omni-Kix Cannonbolt, however, finally recognizes the Knight's identity and chases after him, until the Knight takes a hold over Max and proposes for him to allow him a clean escape in exchange for his grandfather's life. Forever Knight is ultimately captured and taken away for inspection by Phil.

Forever Knight is a skilled martial artist, as shown besting Shock Rock in combat. He is also very quick, he was able to fight off XLR8 with little to no strugle.

The Forever Knight uses an energy shield and mace as his primary weapons. The mace can also turn into a spear or sword.

The Knight occasionally uses a drone to observe Team Tennyson and their enemies.[5]

At his mansion, the Knight has a robotic servant that performs much of the manual labor.[6]

His helmet, made of alien technology can absorb his consciousness from his body and can possess and take control of anyone it latches onto.

Retrieved from "https://ben10.fandom.com/wiki/Forever_Knight?oldid=1033493"
Community content is available under CC-BY-SA unless otherwise noted.