Fistina is a character and former villain in Omniverse. She is an Acrosian living in Undertown.

Fistina is a pink alien with yellow eyes inside a red and black power armor. She does not have a torso. When she was deputized by Rook in The Final Countdown, her armor became white and black with a Plumbers' Badge on her neck.

When Fistina became half-Galvanic Mechamorph, her circuitry lines are red, much like the completed forms of Malware. 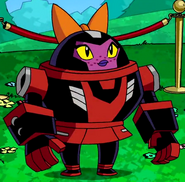 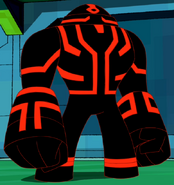 Fistina was the right-hand woman of Bubble Helmet. She doesn't seem to care about anything, as long as she gets to fight someone who dares to stand in her team's way. Fistina likes jewelry and has been seen flirting with various men, including Rook, Solid Plugg and Loovis. Since her suit was created by the Techadon Weapon Masters, she is familiar with the name "Techadon".

Throughout the series, she developed a deep crush on Rook, whom she calls "Little Rook". Her feelings slowly managed to overcome her rogue personality. Due to this crush, she was more than happy to help Rook when he had no other option. The incident made Fistina realize that good guys always win and Rook would like her more if she was not a villain. She was even willing to sacrifice herself for every Plumber in the Universe, proving her devotion. When she received a Plumber Suit from Rook, she focused on it being the color of a bride's dress on Earth, implying that she's serious about her pursuit of Rook and possibly that she'd like to follow Earth customs.

She finds Gracklflint babies romantic gifts, sending one to Rook.

In The More Things Change: Part 1, Fistina, Liam and Bubble Helmet come into Mr. Baumann's shop, but Bubble Helmet got into a fight with Cannonbolt. Fistina and Liam set the bomb on the floor but they were caught by Rook. After the bomb exploded, they escaped to Undertown.

In The More Things Change: Part 2, they returned to their base and were defeated along with Psyphon.

In Rules of Engagement, she helped Ben to defeat Looma Red Wind. Having already been captured by Ben and Rook earlier in the episode she was in their custody when they confronted Looma Red wind who was rampaging in Bellwood and Undertown kidnapping people as part of her engagement to Ben. While defending the Kraaho Rook is kidnapped as well and Fistina aids Ben in finding them, as they also have one of her fists she can track them, in order to rescue Rook the object of her affections.

In The Ultimate Heist, she was seen working for Argit along with Solid Plugg. She and Solid Plugg got into Inspector 13's warehouse and they defeated the Techadon Robots inside. However, like the others, she was tricked by Albedo and got tied up by his Wildvine's vines. While they were tied up she flirted with Solid Plugg.

In No Honor Among Bros, she and Fistrick escaped from the Plumber HQ in order to participate at the Golden Fist Tournament. She was defeated by Fistrick in the semi-finals. At the lobby she knocked out the guards and stole the Golden Fist. However, before she could have caused any harm she handed over the fist to Rook, because of her crush on him she won't hurt Rook.

In Universe vs. Tennyson, she was freed from her cell by Chadzmuth. Later she was recaptured by Terraspin but was freed again.

In The Final Countdown, Fistina was already in custody when Kundo took over the Plumber Headquarters seeking revenge on his former pupil Rook Blonko whom was working the graveyard shift in HQ at the time. In order to undo the lock down cutting the Plumbers off from each other, Rook, with a great deal of reluctance, and on Robucket's insistence, deputized Fistina and her aid soon proved to be invaluable in regaining control of the base. Once the situation is resolved Max Tennyson states that after she serves her time she can apply to the Plumbers' Academy.

In The Most Dangerous Game Show, Fistina is among the many females chosen to compete for Ben's hand in marriage, but is subsequently eliminated.

Fistina's abilities come from her containment suit, a Techadon product,[1] which serves as a battle armor and grants her some durability, mobility, as well as the power to shoot her fist like a grappling hook. She can also control the movement of her armor's hands when they are separated from her body. It also enhanced her strength. Her helmet has a retractable visor that protects her in airless environments.

Without her armor, she can't do anything but talk.

A certain frequency of sound will make her armor fall apart.