The Transmogrification of Eunice

The Unitrix, self-nicknamed Eunice, is a prototype Omnitrix which can absorb and contain DNA of various different species. She is also one of Azmuth's creations.

In her true form, Eunice is the Unitrix, a core similar to the Omnitrix and Ultimatrix.

Unlike future models, the Unitrix resembles a container instead of a watch, but does feature a control dial that, when pressed down, turns it to its mobile DNA form (in this case, Eunice).

After gaining human DNA from a randomised genetic sample, Eunice appears as an adolescent woman, with around shoulder-length blonde hair and bright green eyes.

When Ben's Team first found her, Eunice was completely naked, then she borrowed Ben's jacket so she wouldn't be seen naked. Afterwards, she borrowed a pink tank top, white shorts and brown flip-flops from Gwen. Since working for Azmuth on Primus, she now sports a white jumpsuit with black stripes.

There are green rectangular markings on the back of Eunice's neck. When they are pressed, Eunice turns back into the Unitrix.

In Omniverse, Eunice now wears a white dress with a black collar and one stripe in the middle. She wears black fingerless gloves and now wears black boots. Her hair is now shorter and she wears a black hairband, which resembles Gwen's season two look in Omniverse. 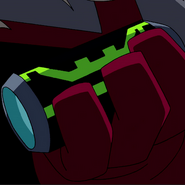 Eunice is kind to humans and animals, and shows love and care for everyone. She is very appreciative to those who help her, and cares about animals so much that she wouldn't eat them. Even though she is artificial, due to the fact that she takes the form of a human and has the personality of one, she doesn't like to be treated as an object.

Sunder was hired by Azmuth to find the Unitrix when Azmuth lost it.

The Unitrix's pod was discovered in the forest at the same time Ben's Team was driving for a camping trip. After encountering her, she stayed with them for the day, bonding with Ben (who had recently broken up with Julie), the two of them were soon attacked by Sunder, who shut Eunice down and attempted to get away before Kevin and Gwen stopped him as Kevin restarted the Unitrix again.

While the four of them scuffled with Sunder that led to a muddy area, Azmuth arrived, broke up the fight, and cleared things up. He stated that Eunice was the Unitrix, a prototype version of the Omnitrix created when Azmuth wanted to preserve alien DNA by placing genetic samples in individual Unitrixes that can animate themselves to take on the appearance, and use the abilities of the DNA samples that were uploaded into them for protection. Azmuth states that when Gwen cut her hand trying to open the pod containing the Unitrix, her DNA was sampled and randomized to make a human form for the Unitrix (explaining why Eunice has blond hair while Gwen has orange/red hair). Following a brief argument, Ben allowed Azmuth, under a compromise, to take on Eunice as one of his assistants on Primus.

In Simian Says, Eunice was tending to DNA in the Codon Stream, where she found the Arachnichimp DNA had some degradation. She went to Aranhascimmia to get a fresh DNA sample, where she found the Xenocite infestation and stayed to help. Eunice was eventually thrown into a pool of Xenocites and turned into a DNAlien. She fought Swampfire, but was cured. She eventually used Simian to revert all the Arachnichimp DNAliens to normal.

Eunice was seen in a flashback in The Ultimate Enemy: Part 2.

Eunice makes a cameo in The Most Dangerous Game Show.

Eunice is capable of storing DNA of various different species. Unlike the Omnitrix and Ultimatrix, Eunice is not connected to the Codon Stream, and unlike the completed Omnitrix, she can only hold one DNA sample.[DM 1]

Eunice was shown to be able to copy the powers and abilities of different animals and then to manifest traits of these animals without changing her form. Whatever Eunice absorbs, she only has the abilities of it for ten or so minutes.[DM 2]

In addition, local wildlife seemed to be attracted to Eunice to the point where normally shy animals would gather around her and more dangerous animals (like a bear or snake) would be tamed by her presence.

Prior to Simian Says, Eunice received an upgrade to have a one way subspace link to Primus for uploading DNA samples.

If the markings on the back of her neck are pressed, Eunice will revert to the Unitrix.

Having her link to Primus active, Eunice can cause parallel signal interference which could cause the Ultimatrix to lose its connection to Primus if it is nearby. Eunice can shut it off to prevent this.

Eunice can be turned into a DNAlien. However, she can be cured by turning the Unitrix off and back on again.

According to Azmuth, Eunice is dangerous. The reason why has never been explained.