Enoch had significant influence in the Forever Knights organization, appearing as their paramilitary commanding officer in their first three appearances.

Enoch always hides his face behind a gold-colored mask. On this mask is a grey-blue pointed crown, and the rest of his head is covered by a hood. On his chest he wears a burgundy surcoat with the symbol of the Forever Knights and a grey belt. His arms and legs are completely covered by armor.

In Ultimate Alien, his appearance is similar to the original series, but his crown is golden and differently shaped, his arms and legs are covered by silvery armor, and his torso is covered by a red surcoat with the new symbol of the Forever Knights in the center. In addition, his mask now syncs mouth movement with his own lips. 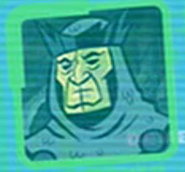 Enoch in The Secret Saturdays

Generally, Enoch employs a calm, intimidating demeanor, despite any adversity.

He is incredibly ambitious in his quest to attain power, especially in obtaining powerful weapons technologies. This is noted in Ultimate Weapon, where although the temple collapses he continues to go after the Sword of Ek Chuaj.

At the end of A Small Problem, Enoch orders his subordinates to find out about everything there is to know about Ben, Gwen and Max.

In Ultimate Weapon, Enoch attempts to retrieve the Sword of Ek Chuaj - a sword of incredible power - only for it to crumble to dust when he finally finds it in a temple, since his "ultimate weapon" was over 5,000 years old. He remains in the temple as it collapses, trying to collect the dust of the weapon.

In The Unnaturals, Enoch resurfaces as the mastermind behind a plot to replace the President with a robotic duplicate using a team of robotic baseball players fittingly called the Squires, which was foiled by the Tennysons, though they remain unaware that he was part of it. He vows to make the Tennysons pay with their lives.

In Perfect Day, Enoch entered Ben's dream at the time of his capture and posed as Lieutenant Steel, claiming that the real Gwen and Max were Limax. Four Arms eventually saw through his disguise. Enoch's plot was finally foiled when Ben took control of the dream, turning himself into Ultra Ben and ejecting Enoch from the dream before escaping. After a brief struggle with XLR8 in the real world, Enoch was unknowingly trapped in the dream world, believing the machine malfunctioned and he came into possession of the Omnitrix.

Enoch is later found by the Forever King and Forever Ninja. With Enoch's multiple failures, the Forever King decides to leave him be, trapped in his beautiful dream, stating he will deal with the Tennysons himself. It took Enoch years to recover from the dream machine.[pop-up 1][1]

In The Purge, Enoch returns, now a leader from another faction of the Forever Knights, where he was among the other Forever Knight leaders present at Old George's meeting and bowed before him. Also present was his former Forever King, Driscoll, with whom he seems to have severed ties.

As with virtually all the Forever Knights, he later perished during the final battle with Dagon's Esoterica.[DJW 1]

Enoch serves as a mini-boss in the video game Ben 10: Protector of Earth in the level Area 51 and uses a sword to battle. He appears in the next battle at the Hoover Dam, where he uses a giant mecha suit made from Area 51 technology and Forever Knight technology and powered by the Cannonbolt DNA and energy from Hoover Dam on both accounts he is defeated and on both accounts he manages to get away. His goal was to use the suit and the DNA to prevent Vilgax from sucking the earth into the Null Void but was prevented by the well meaning, yet completely unaware of Vilgax's plot at the time, Ben Tennyson.

In Cosmic Destruction, it is revealed Enoch is powered with one of the pieces of the Potis Altiare. When the artifact was taken from him, it seemed like he was turned to stone. He is in the Catacombs level.

In this timeline, Enoch is more medieval due to his words during the cutscenes. He said he has been hiding in the Catacombs and his power has been growing for the past six years.

Enoch comes from the Hebrew name, which originally means "dedicated".