Echo Echo is the Codon Stream's DNA sample of a Sonorosian from the planet Sonorosia.

Echo Echo is a small white alien whose body is a living amplifier. One of the most noticeable features is a square appendage resembling an MP3 player behind his back with a port on it - decorated with a 10 symbol and what looks like cassette tapes on his lower legs. Echo Echo is made out of silicon. Echo Echo wears the Omnitrix/Ultimatrix symbol on his chest in Alien Force and Ultimate Alien.

In Omniverse, Echo Echo looks pretty much the same only his eyes are now line-like and now has two black stripes on both of his ear plugs. His legs are also a little bit more stubby and the green circle on his hand is now bigger, covering most part of his hand. The Omnitrixsymbolis now located on his forehead. He is also shorter and has a hexagonal shape on his stomach. The tapes on his legs are now gone. 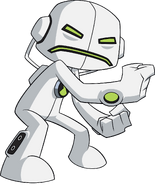 Echo Echo can scream at audible to ultrasonic frequencies capable of overloading machinery and stopping projectiles in mid-flight.

Echo Echo has the ability to duplicate himself, not unlike Ditto, but different in that the clones aren't linked in any way, allowing entire groups to be knocked out without harming the rest and he can clone himself much faster than Ditto can.

By combining these two aspects, Echo Echo can create a "Wall of Sound", where Echo Echos can redirect projectiles back to their source by bouncing them off of strategically placed Echo Echos.

Echo Echo can create an "Echo Chamber", where Echo Echos attack from all directions and keep screaming until the target is knocked out or defeated.

Echo Echo can also use echolocation, as seen in Alone Together.

Echo Echo can channel vibrations to enhance his screams, as seen in Undercover.

Echo Echo can transmit sound waves through speakers (such as phones), as seen in Grounded.

Echo Echo can detect vibrations in the ground.

Echo Echos have to go back into one Echo Echo before transforming or else the clones become multiple personalities as seen in Duped.

Echo Echo is quite agile, shown from his ability to jump quite high.

Echo Echo seems to have more strength than his size suggests, as he can kick off the trunk door from Ben's car with one foot.

Echo Echo is able to throw (about a meter) a Plumber Ship with nine Echo Echos in Prisoner Number 775 is Missing.

A glitch power in Inspector 13 allowed Echo Echo to clone items he was holding.