Driscoll was a member of the Forever Knights who first appeared in Perfect Day.

Driscoll is a semi-bald man with black hair, blue eyes and a short beard.

In the original series, Driscoll possessed a high-tech suit of power armor.

Driscoll in his Forever King armor 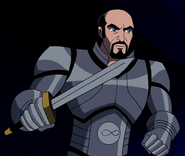 Driscoll in his old Forever Knight armor in Ultimate Alien

Driscoll is an arrogant, sadistic, and cold person.[1] After getting the Sub Energy, he intended to leave his Forever Knights and villain colleagues behind. When he has no use for people, he will stab them in the back when it is convenient for him.[2]

Like other Forever Knights, Driscoll despises aliens. At times, Driscoll has shown to have a little sense of honor, as shown after Ben defeats him.[3]

Driscoll was once a veteran Plumber who was kicked out of the organization when it was discovered that he was stealing advanced technology from alien perps and using it for his own benefit. He later joined the Forever Knights and worked his way up the ranks to Forever King. He then created a splinter group with the desire to conquer the world and gain revenge on the Plumbers.[1]

Driscoll appears at the end of Perfect Day, where he tells the Forever Ninja not to release Enoch from the dream machine, saying he has failed him enough, and that he will deal with Ben Tennyson himself.

Driscoll creates a group of Ben's enemies, consisting of himself, the Forever Ninja, Dr. Animo, Charmcaster, Rojo, Clancy, Sublimino and the Circus Freak Trio. He planned to use them to destroy Ben, while also targeting Gwen, Max, and their tag-along Cooper. When they escape most of their assaults, they hide out in the Plumber base in Mt. Rushmore, but Sublimino hypnotized Cooper to attack the Tennysons.

After dealing with Cooper, the Tennysons worked together and took down most of the Negative 10. However, Driscoll's real motive was to take the Sub-Energy and use it to power up his suit to take over the world. However, Upchuck ate the Sub-Energy and defeated Driscoll. Though defeated, Driscoll managed to escape.

Driscoll returned in The Purge, where he and the rest of the Forever Knight faction leaders were summoned by Sir George. Although he initially attacked the old man, Driscoll stopped once he realized who George really was and agreed to serve him, swearing loyalty to the "Founder of Our Order, The Original Forever Knight."

Later, while leading a group of Forever Knights to capture aliens, Driscoll was challenged by Ben to honorable combat over the fate of the prisoners, which Ultimate Spidermonkey won. Despite this, Driscoll refused to let the aliens go, ordering the Forever Knights to kill them. However, after a powerful death threat from Ben, Driscoll and his Knights withdrew. Driscoll apologized to George for his failure, who said that it was not important and put him in charge of the Knights while he left on a sacred journey.

In A Knight to Remember, Driscoll, along with Sir Cyrus and a group of Forever Knights, is inspecting the arrival of a new piece of equipment when Ben appears. The Knights immediately attack him, who transforms into Fasttrack and steals their weapons. After a brief discussion about traitors within the Forever Knights, Ben's team show up with a captured Winston, who was apparently mind controlled by the Dagon. Enraged, Driscoll orders the execution of Winston but Ben cuts it off, asking for answers. Driscoll tells them the legendary story of "Saint George and the Dragon". Driscoll allows Ben and the team to decipher the calculations left behind by George, revealing where he was heading. After they do so, Driscoll personally stuns the trio before leading Cyrus and several Knights to George's location.

Upon reuniting with George, the group journeys into the shrine where the Dagon's heart and Ascalon are kept. They are ambushed by the Flame Keepers' Circle. Driscoll and Cyrus battle Conduit Edwards but are defeated by him. Later, Driscoll attempts to help George stop Vilgax from breaking open Dagon's seal. Driscoll was killed by Vilgax after confronting him at the seal from which the Lucubra emerged from.[DJW 1]

In Ultimate Alien, Driscoll wears another set of powered armor, but sometimes without head covering. It greatly enhances his strength, gives him enhanced durability and harnesses energy beams through his gloves. He also uses an energy lance, sword and a hovercycle while in battle.