Dr. Pang, also known as Toothache, is a minor character and a villain and Ben's dentist in Ben 10. He first appeared in Screamcatcher.

He is a white human male with unruly black hair and dotted pupils. He wears a white doctor's coat over a light blue shirt and a blue tie with grayish brown jeans, black shoes, and turquoise rubber gloves.

In his Toothache form, he resembles a demonic monster made out of teeth with a skull-like face and purple eyes. He has a bulky body with four fingers and two toes and his legs are hind legged. He has three rows of teeth behind the front row teeth like a shark. His shoulders resemble a perfect round row of teeth like from the mouth. On his back to his neck and head, there are spike-like fangs that go downward. His knuckles, gauntlets, toes, hind leg scales, and heel spikes resemble giant buckteeth. 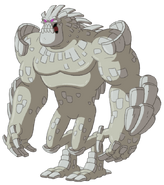 As Dr. Pang, he is a sweet and nice man with a humorous side and confusion to anything bizarre like encountering Hex. But later on, he revealed an angry obsession with hating sweets and cavities, showing an evil split personality when talking to a mirror. He's also shown to be quite impatient, even if he acknowledges it and regrets his behavior.

As Toothache, he has an obsession with destroying anything sweet and teeth rotting to rid off of cavities forever. He grinds his teeth every time he smells, sees or hears anything sweet related. However, he isn't completely heartless. When he sees how badly a lifetime making candy has affected Mr. Biggie, he instead pats his back as he sobs, though this could also be because Mr. Biggie had no problem letting him destroy his newest candy store. When Mr. Biggie decides to dedicate his life to making healthy snacks instead of candy, Toothache dropped his grudge and became friends with him, happily letting the former candy entrepreneur use him as a mount.

Dr. Pang was a dentist who was also an adventurer in the past. He took a break from adventuring and became a back-alley dentist close to a restaurant in Screamcatcher. While working as a dentist, he uses a relic to calm his patients. He forgot where he got it, either he inherited from his grandfather or spelunking in the Lava Caves of Iceland.

Dr. Pang was a judge in Ben and Kevin's food contest in I Don't Like You, and fled with the other judges once the competition went out of hand and turned into a fight.

Dr. Pang later on starts to develop a hate for sweets because it was a huge source of cavities. He then created a formula to turn himself into a tooth monster to rid the world of all sweets and cavities. He then turned into a monster during the Tennysons' visit in Sweet Tooth before being calmed down by soothing music and leaving to undergo treatment after reverting to his normal form.

As Toothache, he can generate bone spikes from the ground similar to how Diamondhead does with his crystal and wields an impressive amount of agility in spite of his bulky size. He can also summon giant teeth to block attacks or create platforms for him to leap off.

Toothache's jaws seem to be powerful enough to leave a bite mark on Omni-Kix Four Arms' armor and rip it off entirely and detach his rocket arm with his mouth. His strength can be an equal match to Four Arms' strength.

Relaxing music can calm his rage and turn him back to normal.

Since Toothache's body is made up of teeth, he is vulnerable to things that damage enamel, such as sour candy.