Ditto is the Omnitrix's DNA sample of a Splixson from the planet Hathor.

Ditto is about the height of an average human child. He has white skin, a black and white head and face, black shoulders, large hands with four digits and feet which are merely stubs. Ditto also has three fin-like growths on his head, and gem-like extended sensory nodes[TP 1] on his arms and waist.

In the original series, Ditto's clothes were black and had an overall-like design. He had green eyes with light green pupils and wore the original Omnitrix symbol on his forehead.

In Ultimate Alien, Ditto looked exactly the same as he did in the original series, except the white section outlining the hourglass symbol across his chest and arms was blue. He no longer had pupils and wore the Ultimatrix symbol on his chest.

In Omniverse, 11-year-old Ditto's design is roughly similar to his original appearance except he appears smaller and stubbier. All of his fins are recolored white, with the ones on the sides of his head now connected to his eyes. He has two small whiskers on each of his cheeks, his fingers are sharper, and the sensory nodes on his shoulders have been relocated to his shoulders and wrists. His jumpsuit has been altered as well, with his neck being completely black and the feet being cut off to reveal three cat-like toes on each foot. The Omnitrix symbol on his forehead has been recolored green.

16-year-old Ditto looks exactly like his 11-year-old self, except he his fins are recolored green and his jumpsuit is now green with black patches under his arms, green sleeves, and black ankles. This jumpsuit seems to have a design based on the Omnitrix's insignia, with black triangles on the shoulders and green in the center. The three sensory nodes on Ditto's waist are now on a black belt. Like his younger self, Ditto wears the Omnitrix symbol on his forehead.

Ken's Ditto looked the same as 10-year-old Ditto in the original series. 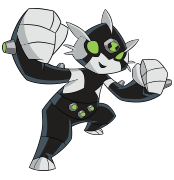 Ditto has the ability to clone himself with no limit. At age 10, the execution of this ability was like actually splitting in half. By age 16, it is now similar to Echo Echo, in which he can split and re-merge at a fast pace.

Each Ditto operates independently, regardless of what the others want them to do and each clone is indistinguishable from the others. This allows Ditto to do multiple tasks simultaneously or to cover a large area. An example of this is when Ditto is able to extend his reach across a vast distance by simply cloning himself in a straight line, thereby forming a chain of Dittos.[1]

The extended sensory nodes on Ditto's body assist in the sensory web that connects all of his clones.[TP 1] This sensory web allows the clones to share senses and physical sensations, such as pain.

Ditto is more flexible than a human, and can breathe underwater.[2][3]

Ditto is quite agile and can burrow into the ground and pop out like a mole.[3]

Ditto can jump surprisingly high for his size; while playing basketball, Ditto slam-dunked the ball through a hoop in a way that would be difficult for an average human to jump high enough to do.[2]

Ditto's clones share a link with each other, making it so that if one Ditto is hurt, all the others feel the same pain and if one Ditto gets killed, the others are automatically killed as well, thus negating the ability to form an army of clones.

Due to the fact that each Ditto only has the reach of a small human child, this puts him at a disadvantage when facing off against a bigger, stronger foe. Normally, Ditto compensates by overwhelming his opponent with sheer force of numbers.

Ditto's clones can be fused back together with enough force.[1]

If the Dittos cannot agree on one plan, an argument might break out between them.[2]

If the Dittos are too far apart from each other, he cannot change back into Ben until all the duplicates are close enough together. It seems that this requires more power from the Omnitrix than normal, as seen later when he could only transform into Upgrade for a fraction of the normal time limit.[2]

Ditto is not resistant to cold temperatures.[3]

Ditto can be harmed by electricity while in water, such as when he was tortured with an electrical prod by Dr. Animo while he was held captive in a container filled with water.[2]

Ditto can be controlled by Vladats via their Corrupturas. However, the latter cannot control all of the Ditto clones as each of them are independent.[DJW 1] Furthermore, the Corrupturas will not be copied across his clones.[DJW 2]

Being a Splixson, Ditto is vulnerable to being trapped by a Panuncian, as they also possess the ability to clone themselves with no limit.[4][3]