Deefus appears to be more obese and less defined in comparison to other Lenopans shown in the series. 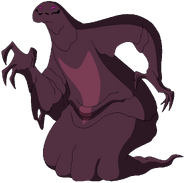 Deefus is arrogant, selfish, cowardly, and cares only about himself. He has a large ego and believes himself to be both a great hero and actor, though in reality he excels at neither. This is also due to the fact that Simian feeds his ego.

Deefus went into acting after being bitten by a literal acting bug on Ulternus Sigma.[DJW 1] He became the star of a tokusatsu-style (i.e. Japanese live-action drama with special effects) intergalactic children's television series called The Ben 10 Show, based on Ben Tennyson, but making the claim that he's the "real Ben 10."

The supporting cast includes his "archenemy" Sporemax, (Solid Plugg) and his sidekick Gwevin (a combination of Gwen and Kevin). Apparently, the role of Gwevin has been re-cast at least a dozen times, with Simian being the latest. Furthermore, an equal number of producers/directors went insane and quit the show, with Hokestar being the latest one.

Deefus makes his first appearance in Collect This, during a "bank robbery" in Undertown, though this was all a stage act. He later puts on another performance, causing a traffic jam during Bellwood's rush hour, and carelessly endangering innocent civilians.

Deefus eventually plays into Simian's hands by signing Greenland with letters big enough to be seen from the Andromeda Galaxy, thereby alerting Collectimus. He breaks down into a blubbering mess as he's about to be "collected," but is saved by Ben. On Ben's request, Deefus decides to go by his real name, causing Hokestar to go into a crying fit.

Deefus can shapeshift into Slapstrike, Unitaur or any other alien or human. Each transformation has a unique set of abilities at disposal.

Aside from the fact that his arrogance and cocky attitude makes him careless and could possibly endanger innocent bystanders, Deefus also appears to have a low pain threshold, wincing in agony after Ben grabbed his hand.

Though he states that he studied under the Drama Beasts of Kolat Zundermung and even brought Vulpimancers to tears with his performance of "Old Smeller," Deefus' acting skills are mediocre at best.