Decka is Orb's best friend. He appeared in Fool's Gold.

As a member of his species, Decka has light brown fur with a dark pink tummy and muzzle, white hair around his head, a white tail, and yellow eyes.

In his primal form, Decka becomes much larger and more muscular. His fur changes from brown to a dark red, and his tail becomes longer. 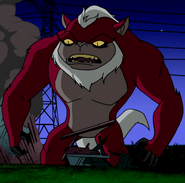 Decka has a bad temper and gets frightened easily. He also wasn't very grateful to Ben's team for helping him return to normal, and decided to never come back to Earth again.

Decka was kidnapped and put in a cage by Mayor Coleman so he could have an endless supply of gold, but when Mayor Coleman fed him meat he transformed into his primal form in which caused him to eat everything in sight. Echo Echo defeated him by letting him eat his duplicates, which are made of silicon. This caused Decka to vomit, expelling everything he ate and reverting him back to his normal state.

After he returned to normal, he says that he will never again return to Earth and will tell the others so they won't come back either, much to the mayor's greed.

Decka is quite strong, even in his normal form, but in his primal form, he becomes a lot stronger and more durable.

In his primal form, Decka has the ability to absorb energy.

As a member of his species, Decka cannot eat certain things such as silicon, or he will become very sick and nauseous. This weakness was used by Ben as Echo Echo to return him to his normal form.