Decimus Prime is the Omnitrix's DNA sample of a Cybertronian from the planet Cybertron. He is exclusive to Ben Prime's dimension.[note 1]

Decimus is a large green robotic humanoid. He has white fingers, two rods sticking out of his back as well as tires on his shoulders and legs. A large Omnitrix logo on his chest, with the real one in the middle. 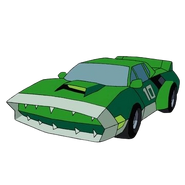 Decimus is able to transform into a car that allows him to drive at high speeds.

Decimus has some type of energy melee weapon.[DJW 2]

Because he does not breathe oxygen, Decimus Prime can survive in the vacuum of space.

Decimus is vulnerable to unnatural uberpredators, such as Unicron and Primacron.[DJW 3]

Decimus can be possessed by Ectonurites.[DJW 5]

Decimus is vulnerable to having his body dismantled by a Planchaküle.[DJW 6]

Retrieved from "https://ben10.fandom.com/wiki/Decimus_Prime?oldid=1088804"
Community content is available under CC-BY-SA unless otherwise noted.