King of the Castle

Dark Matter is the Antitrix's DNA sample of a mutant Galvan/unknown hybrid and Kevin's equivalent to Grey Matter.

Dark Matter is a red-skinned, frog/demon-like, bipedal alien that is significantly taller than Grey Matter, rivaling Four Arms in height. His limbs and fingers are long and slender, with his fingers having claws. Unlike Grey Matter's feet, he has two front toes and one back toe on each foot, which are also pointy. He has large glowing red eyes with minus-shaped pupils, seemingly lacking the black outlines other Galvan have. On his head are two horn-like growths. He wears a grey vest over a black sleeveless jumpsuit with two black stripes going around the middle of his chest.

In Wheels of Fortune, Dark Matter wore a yellow Sumo Slammers 2 t-shirt with a blue collar and sleeves, as well as white sports shoes with blue accents.

While under the influence of Dr. Animo, Dark Matter's eyes were glowing white and lacked pupils.

In Tales from the Omnitrix, Dark Matter was slim, skinny, and has pale skin color. One of the most notable feature is that his face is bloated and swollen.

Dark Matter wears the Antitrix symbol on his chest. 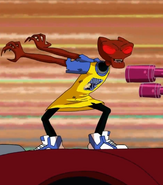 Dark Matter in Wheels of Fortune

Dark Matter in Tales from the Omnitrix

Being part-Galvan, Dark Matter possesses enhanced intelligence similar to Grey Matter, allowing him to instantly recharge Ben's Omnitrix by inputting a specific code sequence.[2] Due to Kevin's modifications to the Antitrix, however, Dark Matter is more powerful than Grey Matter and most likely smarter than him.

Dark Matter has enhanced strength, as shown when he kicked Four Arms and nearly knocked him over[1] and when he threw Ben across a room.[2] He can also shoot dark red fireballs from his hands that encase enemies in a red crystal-like substance.[1]

Dark Matter can secrete a dark red cerebrospinal fluid,[DR 1] which he can harden into a plaque and manipulate it to form weapons resembling the red crystal produced from his fireballs.[3]

The weapons Dark Matter creates from out of his body are a by-product of his mind. While the energies generated in a regular Galvan lead to the acceleration of synaptic activity, in Dark Matter, those energies undirected or improperly directed create the dark matter he issues out from inside.[DR 2]

Dark Matter's cerebrospinal fluid can also be utilized as either a fuel for automobiles[4] or an alternative method for encasing enemies in red crystal.[5]

Dark Matter has enhanced dexterity, as he was able to crawl on the ground with ease.[5]

Dark Matter's larger size makes him easier to hit than a standard Galvan.[1]

If Dark Matter's cerebrospinal fluid is forcibly extracted from him, it will cause great pain to him, as well as render him incapacitated.[4]

There is a limited extent in how much damage Dark Matter's crystal traps and weapons can take before cracking or shattering.[1][6]

Due to Kevin's alterations to the Antitrix, Dark Matter is too powerful for the inexperienced Kevin to currently utilize to the fullest.

Retrieved from "https://ben10.fandom.com/wiki/Dark_Matter?oldid=1259798"
Community content is available under CC-BY-SA unless otherwise noted.