Crystalfist (alternatively known as Black Ice) is the Antitrix's DNA sample of a mutant Subsapien/unknown hybrid and Kevin's equivalent to Diamondhead.

Crystalfist (while closely identical to his original counterpart) bears a more hockey player-like appearance. His gemstone body is dark purple as opposed to the usual teal color. He sports two crystal shards on his back, his head design resembles a helmet with a sharp point on top, and he has red eyes. His collarbone is so large, his neck is simply thin. His shoulders sport spikes and his four-fingered hands are clawed. His hands are also black, resembling fingerless gloves.

He wears a sleeveless black bodysuit with a jagged V-shaped portion on his upper torso colored purple. Six rib-shaped crystal formations surround the back of his waist, while other crystal formations cover his knees like kneepads.

In Tales from the Omnitrix, Crystalfist is depicted as a paper-made puppet. 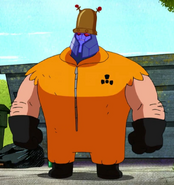 Crystalfist's head on Sydney's body in Heads of the Family

Sydney's head on Crystalfist's body in Heads of the Family 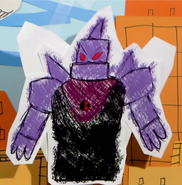 Crystalfist in Tales from the Omnitrix

Being part-Subsapien, Crystalfist shares many of the same abilities as Diamondhead, such as crystal generation, shard projectiles, and energy redirection.[1]

Crystalfist's body, being composed entirely of thick crystals, gives him enhanced durability due to the natural density of crystals. This allows him to withstand most physical impacts.

Being composed of crystals, Crystalfist is immune to aging, as crystals do not age.

Crystalfist does not give off body heat, making him impossible to track by body temperature.

Crystalfist can regenerate, but to a limited extent.

Crystalfist possesses sharp claws which he can extend at varying degrees, as demonstrated by AntiVilgax.[2]

Due to the Antitrix's modifications made by Kevin, Crystalfist can control all the crystals generated by him in any shapes desired, such as tentacles.[3] He is also most likely more powerful than Diamondhead.

Being part-Subsapien, Crystalfist shares many of the same weaknesses as Diamondhead, like there being a limited extent in how much damage his body can take before cracking or shattering.

There is a limit to how strong Crystalfist is, as he cracked his fist after punching a hard boulder.[4]

Since his body is made of diamond, he can sink in water.

Due to Kevin's alterations to the Antitrix, Crystalfist is too powerful for the inexperienced Kevin to currently utilize to the fullest.

There is a limit to how durable Crystalfist's crystals are, as they can be destroyed by species with as much or more strength than a Vaxasaurian.[3]

Crystalfist is a playable alien in the game (multiplayer only). He is the in-game equivalent of Diamondhead.

Crystalfist is one of the aliens used by Kevin, and is available as a playable character, via the Omnitrix.

Crystalfist’s name is based on Crystal and fist, referencing his Crystallokinesis abilities. It is also similar to Diamondhead’s name as both involve a mineral and a body part.