Cooper[note 1] is one of Ben's allies. He is the grandson of one of Max's Plumber friends.[1]

In the original series, he wore a white T-shirt underneath a purple sleeveless jersey with the number 3 written in yellow, a black necklace with a gold bead, black shorts, and white and purple shoes.

In an Omniverse flashback, Cooper has shorter hair, purple eyes, and has crooked teeth. His attire looks similar to what he wore in the original series, but with a few minor changes: his necklace is completely gold, he has purple and yellow wristbands, his shirt is white again, his sneakers have yellow stripes, the 3 on his jersey is larger, and his shorts are yellow instead of black, and they have small purple stripes on the bottom.

In Alien Force, Cooper had gained weight. The rest of his appearance was the same as the original series, except for his T-shirt, which was gray.

In Ultimate Alien, he had a growth spurt and became more muscular, and his attire remains unchanged. He also lost his freckles and his hair is a lighter color.

In War of the Worlds: Part 1 and Vengeance of Vilgax: Part 1, he wore a large red robotic suit in battle.

In Prisoner Number 775 Is Missing, he wears a Plumber suit.

Cooper five years prior to Omniverse 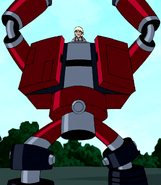 Cooper in a robotic suit in Alien Force

Cooper in a Plumber suit in Ultimate Alien

Cooper is quite a well meaning and friendly guy, although he can be quite naive as well. As a Plumber, Cooper can be a bit nervous but is still brave enough to fight or handle dangerous situations.

Cooper first appeared in Ben 10 vs. the Negative 10, where his grandfather asked Max to pick Cooper up from summer camp. He later proved critical to stopping the Negative 10, from saving Ben at Fort Knox, to upgrading the Rust Bucket, and reactivating the Mt. Rushmore base defenses. However, he was put under Sublimino's control, and turned on his friends. Gwen managed to knock him out, and he remained unconscious for the rest of the episode. He wore a white shirt with purple suspenders.

At some point after these events, Cooper developed a crush on Gwen.

In the flashback episode From Hedorium to Eternity, Cooper is called in by Ben to create a camera to spy inside Thaddeus J. Collins' house. Cooper is initially reluctant, but changes his mind after he hears Gwen's name. The surveillance spider Cooper creates infiltrates the house, but gets stuck underground, with no signal.

Cooper joins Ben and the others in further investigating the matter. As they go inside the house, he offers to hold Gwen's hand, but she declines. Travelling into the caves beneath the house, they encounter Kevin, who has been enslaved by Collins to mine Hedorium. As Cooper works on making Kevin more mobile, Kevin taunts him over his crush on Gwen, telling Cooper that he's the better guy.

Not long after, they discover that Collins has been possessed by Zs'Skayr, who plans on bringing an invasion force of Ectonurites to Earth. In the battle that follows, Cooper succeeds in reversing Zs'Skayr's portal, sending him and his servants back to Anur Transyl.

In Undercover, Cooper returned, having met Kevin on a prior occasion. Kevin suggested recruiting him to repair a teleportation device. When they arrived at his lab, they found it ransacked and Cooper missing. Cooper left a message showing him being captured by DNAliens. When they arrived at Los Soledad they discovered that Cooper's technopathic abilities were used to make a powerful energy source, a large cloaking device, and were being used to build the arch. With Cooper's help the cloaking device is destroyed and a trucker spots the chaos who alerts the police.

In War of The Worlds, Cooper is recruited in a last stand attack on Los Soledad. He uses his abilities to free Darkstar, and create a weaponized robotic suit to fight the DNAliens and later lasers that turn DNAliens back to normal. After the chaos is over Cooper joins Manny, Pierce, Alan and Helen as pupils under Grandpa Max.

In Vengeance of Vilgax: Part 1, Cooper tried to stop Vilgax with his suit and failed.

Cooper returns in Absolute Power: Part 2, where he had experienced a growth spurt and is now tall and built, possessing a similar body shape as Kevin, being different from when he was short and chubby. He retains his big crush on Gwen, but Gwen is focused on saving Kevin. He agrees to Darkstar's plan to create a device to power the Dominus Librium to revert Ultimate Kevin. When he approaches Los Soledad, Darkstar reminds Cooper that the area is an abandoned military base, and realizes that the area would obviously be filled with weapons, though they are no match for Ultimate Kevin.

Cooper later charges Ultimate Kevin in retaliation for attacking Gwen, though Ultimate Kevin outmatches him and tries to kill him though he is saved by Ultimate Echo Echo. Ultimate Echo Echo whispers something to Cooper. After Ben prevented Michael Morningstar's reappearance, he explains that he knew Darkstar's plan all along and told Cooper to build a mechanism to prevent Darkstar from gaining the power if he were to absorb the Dominus Librium, which he did. Afterwards, Gwen kisses Cooper on the cheek. He then witnesses, much to his chagrin, Gwen and Kevin sharing a passionate kiss on the lips.

In Prisoner Number 775 Is Missing, Cooper is seen in a Plumber suit, telling Max Tennyson that Area 51 is gone and nothing was left but a giant hole. He also told him that whatever the Air Force had learned, they would never tell him. He added that no one knows technology like him and he had never seen anything like that. Later, when Max, Ben, Gwen, and Kevin arrived, he sees Gwen and stares at her while smiling.

Cooper is a technopath, able to mentally merge with and control electronic devices, both terrestrial and alien at will. He can telekinetically disassemble and reassemble any technology as well as telepathically interface and communicate with machines to analyze and gather information.

While using these abilities, his eye color would turn into a bluish color with a robotic-like print on them to show his connection to technology.

While unknown to what degree, after his growth spurt, Cooper is strong enough to plow through a wall.[2]

Cooper's signature power, despite being useful to manipulate technology, can render him slightly unconscious, at least when he was at a young age. Either way, this can also leave him wide open to attacks. While the power itself is useful, it can't affect purely mechanical entities that lack any need for electricity to function, especially ferrous components.

Despite being superhuman, Cooper lacks any obvious immunities or resistances, which means he possibly still retains the same exact weaknesses as regular humans.

Cooper was outwitted into helping Albedo make an energy core for Vilgax by extracting energy from a supply of Taydenite on Mor' Otesi. He directed the team to the energy core and helped Kevin and Gwen to find Ben after he defeated Albedo.

Cooper is brainwashed by Psyphon to lure Ben to fight him in Tokyo. He then becomes the boss in Tokyo. Ben destroys a piece of Potis Altiare to save him. After the battle, Ben brings Cooper to the Rust Bucket 3. Ben gets Gwen to teleport him home to rally the other Plumbers' Helpers against Evil Way Big. He tries to kiss Gwen, but Kevin does not allow him. On the DS Version, Ben encounters him at the Research Lab in Venezuela.