Colonel Rozum is a character introduced in Fame. He is a United States Air Force officer with access to high profile information, even about the existence of the Plumbers, and personally knows Max Tennyson from the time they both worked for Area 51.

He is a tall, well-built man. He has black hair and a mustache. The Colonel wears a green army uniform and cap, with badges on his shirt. 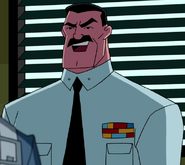 Colonel Rozum in an Omniverse flashback

Rozum is loyal to the United States Government, wanting to protect his country and planet from harm. Even though he has put in charge of any case dealing with "weird stuff" by the Pentagon following his first joint operation with Ben, Rozum is not to pleased about aliens, monsters, robots, UFOs, and anything unearthly in general.[3]

Rozum has severely put a strain on his relationship with the Tennysons, being on thin ice with Max Tennyson regarding the unethical way Area 51 has been used to imprison aliens caught by the military.[1]

Of course, Rozum views most (if not all) aliens as threats to America and Earth. For example, he showed no remorse over Prisoner 775's situation[1] and believed Blukic and Driba were dangerous enough to want them eliminated.[4]

Due to taking years of hard work to gain the clearance necessary for confidential topics, Rozum was frustrated to learn that Ben's team is already aware of the Paradox Project.[5]

Rozum ordered a young Max to shoot down a UFO, though Max disobeyed after he saw Blukic and Driba onboard. Rozum took the two Galvan to his office for interrogation. They refused to talk, so he called a scientist to take the lead on the alien investigation and dissection in hopes that opening them up would allow them to find the answers themselves.

He first appeared in Fame, where he was stationed at a base in Florida overseeing the construction, and later investigating the theft of, the high powered rocket engines being developed by NASA to advance Earth to interstellar travel comparable to other alien species. Because the experimental engines use a form of controlled nuclear explosion as a means of propulsion, they were targeted by Bivalvan, who was easily able to overpower the guards and prompted a greater military presence. USAF fighter pilots patrolled the sites around the base and targeted Kevin Levin's Rustbucket Jet. Rozum had Ben, Gwen and Kevin are subsequently taken into custody and brought to him, seeking to have them assist in the detainment of Bivalvan.

In Ultimate Aggregor, Rozum responds to an old security alarm in Los Soledad activated by Aggregor. He is given the case and is aware of what the government considers to be a failed time travel experiment, the Paradox Project, using an Entropy Pump to generate a weakness in the fabric of space-time allowing travel through time. He enlists the help of Ben and his team in stopping Aggregor from using the Entropy Pump, giving his military strength to assist them should they need.

In Prisoner Number 775 is Missing, Rozum requested Ben and his team's help when Area 51 was attacked before suddenly vanishing. An imprisoned Merlinisapien attempted to get revenge on Rozum for his unjustified decades of imprisonment that cost him the life of his family by targeting Rozum's family before being defeated by Ultimate Wildmutt. As Prisoner 775 is taken in by the Plumbers, Rozum defensively states to Max that he was serving his country and planet.

In The Widening Gyre, Rozum instructed the gang to go to the Pacific Vortex and investigate the disappearances of various individuals, including his sister and the agents he sent to locate her.

In Blukic and Driba Go to Area 51, Rozum ordered SECT to arrest Benevelon and later blamed Max for the destruction of 40 airplanes.