Clockwork is a robot-like alien with skin that is made of golden metal, with black stripes and a transparent piece of green glass on his chest, revealing the gears inside of him.

In Ultimate Alien, the piece of glass on his chest was circular.

In Omniverse, 16-year-old Clockwork has a larger body and holes on the key on his somewhat restructured head. The piece of glass on his chest is now in the shape of a hexagon, and there is a black stripe on his back that splits into two stripes with a keyhole between them.

11-year-old Clockwork has a thinner and rounder head, a white and black shirt, a smiley face, and a circular piece of glass similar to his original appearance.

Clockwork wears the Ultimatrix/Omnitrix/original Omnitrix symbol on his chest. 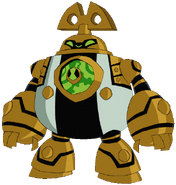 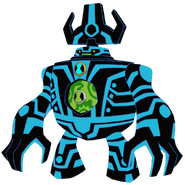 Clockwork can fire green time rays from his hands or chest, which have various effects like sending people back in time,[2] aging an object/person to dust,[3] restoring individuals who have been erased from time, sending them into a different timeline,[1] and reverting them to a previous state while also immobilizing them.[4]

Clockwork can slow down time around himself, making it look like to others that Clockwork is moving at very high speeds.[5]

By rotating the key on his head, Clockwork can create hologram-like projections of what happened in the past.[6][7]

Clockwork has a degree of enhanced strength, as he was able to throw a pipe so hard it became heavily embedded into a wall.[5]

Clockwork is capable of reversing the effects of a Chronosapien Time Bomb using his time powers.[1]

Because he is robotic (rather than biological) in nature, Clockwork can survive in the vacuum of space, as demonstrated by Maltruant.[8]

Clockwork can rotate his head 360° degrees.[DJW 1]

Clockwork possesses chronopathy, which grants him a fine-tuned sense of precise time and determines the exact time an event has taken or will take place and for how long, as demonstrated by Maltruant.[8]

Because he is a technological being, it is possible for a Galvanic Mechamorph to merge with Clockwork, thus making his time rays stronger and increasing his speed and stamina to superhuman levels. While in this state, Clockwork can jump extremely high, morph his hands into drills, fire rockets out of shoulder-mounted launchers, and sense another Chronosapien's head key.[4]

Although he has never trained himself to do so, Clockwork can travel through time.[9][2]

Clockwork can sense the use of a fellow Chronosapien's powers and undo the resulting effects if needed.[1]

With enough power and skill, Clockwork can perform a temporal consciousness conversion in which a person's consciousness is swapped with that of a younger or older version of the target in question,[DJW 2] much like what Eon did to Ben Prime's 16 and 11-year-old selves.[10]

Clockwork is not very durable, as a laser blast from Carl Nesmith's glove damaged Clockwork's right shoulder and caused him to shut down. When Clockwork reverted to human form in this state, Ben's right arm was broken.[3]

If something hits Clockwork's head key, he can be badly stunned; this shows that Clockwork is not very agile, as he admits that he "is not good for dodging."[5]

Because of his large body and short legs, Clockwork cannot run very fast and is low on stamina, meaning he tires out quickly.[11]

The use of Clockwork's time powers creates a ripple effect in time that can be sensed or reversed by another Chronosapien.

Clockwork's time powers are completely useless in a place where there is no time at all, such as the beginning of the universe, as demonstrated with Maltruant.[15]

There is a limit to how strong Clockwork is, as he is unable to penetrate through the Contumelia's machine's extra-dimensional field, as also demonstrated by Maltruant.[15]

Unlike Maltruant, Clockwork is unable to travel through dimensions, even when he's upgraded by a Galvanic Mechamorph.[DJW 3][16]

Because he is a mechanical-based being, Clockwork can be magnetized by a Biot-savartian.[DJW 4]

Clockwork can be temporarily disabled if he is exposed to a large electromagnetic pulse, such as that from a solar pulse.[17][8]

Clockwork is vulnerable to having his body dismantled by a Planchaküle.[DJW 6] Despite that, he can still function if he loses some of his parts.[DJW 7]

The term "clockwork" refers to a mechanism with a spring and toothed gearwheels, used to drive a mechanical clock and other types of devices; this refers to Clockwork being a mechanical alien with gears and time-based powers.